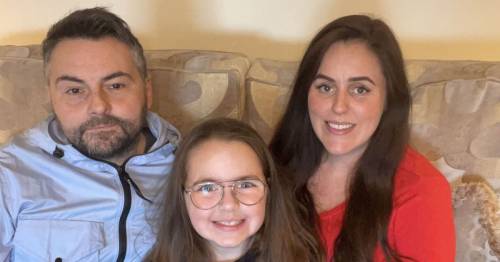 A self-confessed 'sunbed addict' who had a competition with her friends to achieve the darkest holiday tan believes her 'nagging' husband saved her life.

Emma Buchan started using salons when she was just 18 and would visit her local shop around five times a week.

She says husband Craig Buchan noticed a lumpy mole on her thigh when she was around 24 but even then she carried on with he regular visits.

He 'constantly nagged' her to get it checked out but she was in 'total denial' – but he refused to stop demanding she must see the doctors.

The mum-of-one said Craig booked her an appointment in February 2018 and despite the doctor saying it looked 'suspicious' she still believed it was 'nothing' and went on the beds immediately after.

But the HR manager was in 'total shock' when she was eventually diagnosed with Stage 1A melanoma.

She was left racked with 'guilt' at how 'selfish' she had been pursuing a tan as she was 'petrified' that she'd leave daughter India-Rose Buchan, nine, motherless.

Emma said: "My husband saved my life. Even right now if it wasn't for him, I still wouldn't have made an appointment. I think I would have just been in total denial.

"He first spotted it at night when we were in bed. We were probably just watching Netflix.

"He always complained that I needed to get it checked because he thought that it was growing and getting quite lumpy but obviously I didn't think anything of it.

"It was a good few years that he would constantly nag and I think that's why he just made the appointment himself because he knew that I would never do it."

Only her husband's "constant nagging" forced her to see the doctor
(

Emma used to book beach holidays to Spain and Greece to get a tan and used oil more than sun cream, which would be the lowest factor.

Emma said: "I started using sunbeds at a time when a tan became the fashion and everybody else was doing it and said that having a tan made you look better basically.

"When I became a teenager the goal was to get a tan on holiday. I used to be that person out of all my friends that tanned quite easily.

"Even with my friends we'd have competitions to see who could get the brownest on girls' holidays. It's madness now when you think back of all the danger you put yourself in.

"I was 100 per cent a tan addict. It was very clear that I was. Even though the doctor had said that it looked suspicious, I still went back on it [sunbed]. So it was clear that I was addicted to them."

Emma said that when she first noticed the mole it was just the average freckle size and smaller than a 5p piece.

However, it's appearance changed and it became lumpy and by the time she went to the doctors just before her 30th birthday it was 'huge' and oddly shaped around the size of a 20p coin.

Emma said: "When they told us it was cancer and my mum and husband were in complete shock. I don't think anybody expected it to be that diagnosis.

"The penny only dropped when the doctor said 'you've got melanoma', right to that second.

"At the time I was just petrified for my daughter. I don't actually remember the conversation. All I heard was the word 'cancer' and then I just thought 'my daughter. She's not going to have a mum. What have I done?'

"The guilt and how selfish I felt for using tanning beds and sunbathing with no protection and things. I was just in total shock.

She made a vow to leave sunbeds behind, saying: "I'll never use them again,.

"It's not worth it. There's comments on my post where people are like 'well, I'll die with a good tan' and it's that mentality of thinking that it won't happen to you."

Previous : Vote of no confidence in police boss who said Sarah Everard should have resisted arrest
Next : Stocks rise as Wall Street wades into bank earnings blizzard