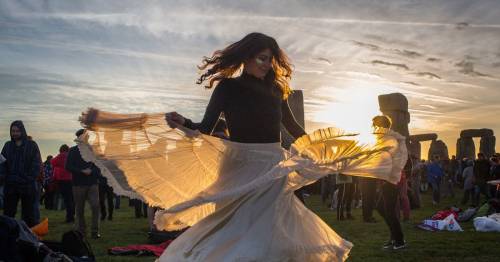 Summer is finally here as the UK whips off its jumper, pulls on its shades and slides into the nearest pair of flip-flops.

Up and down the country, people have been flocking to parks, beaches and gardens (beer or otherwise) to soak up the rays.

There’s been test match cricket, Ascot and Queens. Wimbledon is just around the corner and England’s football team have been thumped by Hungary – summer truly is here.

But in the rose-tinted haze of long days with a Pimm’s in hand, it’s important to remember there are actually some interplanetary forces at work ensuring the weather stays good (ish).

One such event is the summer solstice, which relates directly to the positions of the Earth’s poles and the sun. Read on to find out more.

What is the summer solstice?

A glorious orange light drenches Stone Henge for the solstice
(

The summer solstice happens on the longest day of the year. This is the day where it remains light for the longest period of time, with the sun rising early and setting late.

For many, the solstice marks the start of summer and the end of spring, the announcement that the warmest months are finally here.

For others, it can be a little more melancholy as, because it is the year’s longest day, the days from that point onwards get shorter in the countdown to winter.

In slightly more sciencey terms, the solstice is caused by the North Pole, as its position points more closely to the sun as the Earth goes about its orbit.

Slightly confusingly, the solstice can also be called midsummer.

When is the summer solstice?

Sunrise at Glastonbury Tor in June
(

The further north you go, the later it will become.

What traditions are there for the summer solstice?

Glastonbury Festival kicks off at the mark of the summer solstice
(

The summer solstice in the UK comes attached with a spiritual element, with druids often meeting at spiritual places such as Stonehenge or Glastonbury Tor to see in the summer.

In the UK, reports have already come in that some 6,000 people flocked to the mystical Stonehenge to see the sunrise.

This year, the Legendary Glastonbury Festival, famed for its mystical and spiritual tint, will open its doors at midnight on the night of the solstice, kickstarting the festival along with the official start of summer.

Previous : Farmer, 71, dies in horror ‘cow attack’ as heartbroken family speak of their devastation
Next : Trainee police officer drew red lines on Covid test so he could get time off work