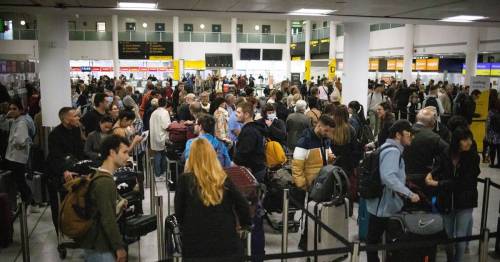 The UK is heading for a summer of discontent as the cost of living crisis, upcoming rail strikes and a rise in Covid infections threaten to unleash misery across the nation.

Half of Britain's train lines will be closed during strikes by the RMT union next week, while transport bosses have "strongly encouraged" people not to travel on the tube on June 21 because of a 24-hour walkout.

Meanwhile, more than 115,000 Royal Mail workers are also set to be balloted for industrial action in a row over pay in the coming months, severely impacting postal and parcel deliveries.

These strikes have been compounded by flight delays and cancellations over the past few months, as airlines struggle with a shortage in staff and a rise in demand.

More than 115,000 Royal Mail workers are also set to be balloted for industrial action in a row over pay in the coming months (file photo)
(

On top of travel disruption, the Bank of England has hiked the base rate – a tool used to help control the economy – triggering a huge knock-on impact on mortgages, loans and savings.

Brits have already had to contend with the soaring cost of living as prices of the cheapest food items in supermarkets have surged in the past year, while the cost of petrol and diesel has reached record highs.

Aside from travel and economy woes, Covid cases have been on the rise in the UK for the first time in two months.

Monkeypox infections have also soared past 500 in the UK.

Health chiefs last week issued new isolation guidance related to the disease including social distancing and urging Brits to check for a rash.

As fears grow over this summer echoing the winter of 1978-79, which similarly saw strike disputes, rising inflation and fuel shortages that almost brought the nation to a standstill, is Britain facing a summer of discontent?

Energy bills are expected to rise again this year, with households already paying sky-high prices for their gas and electricity.

The Ofgem energy price cap, which sets a limit on the rates a supplier can charge for each unit of gas and electricity you use, rose by 54% on April 1.

The Office for National Statistics shows pay rose by 4.2% on average in the first three months this year, a real terms wage cut for millions.

To help combat the hike in costs, Rishi Sunak last month unveiled a £15billion package that will provide a £400 discount to millions of households, with £650 payments for eight million of the worst-off families.

But the Chancellor also dampened hopes of further help, saying: "It’s not possible for the Government to fully insulate people from increases in the cost of living and inflation.

"The structure of what we have put in place is by definition temporary and it is a careful and well-constructed package which will minimise the issue of inflation."

Members of the Rail, Maritime and Transport union (RMT) at Network Rail (NR) and 13 train operators will walk out on June 21, 23 and 25.

The RMT also announced another 24-hour strike on London Underground in a separate row over jobs and pensions.

NR chief executive Andrew Haines said the network is looking to cut between 1,500 and 2,000 jobs, insisting it can be achieved through voluntary means, particularly as a "significant" number of employees are over the age of 60.

Members of the Rail, Maritime and Transport union at Network Rail and 13 train operators will walk out on June 21, 23 and 25 (file photo)
(

The railways are facing a "fundamental financial deficit", with fewer passengers travelling as a result of the pandemic, especially on Fridays, although numbers have improved for weekend leisure travel, said NR.

Last night, Unison general secretary Christina McAnea was questioned about a 'summer of discontent' and whether rail unions would consider striking at the same time.

She told LBC: "I would certainly not rule that out. In all the sectors where we organise, we will definitely be talking to the other unions but also, through the Trades Union Congress… yeah, I would absolutely be up for coordinating this across other unions."

Tens of thousands of passengers have been affected by flight cancellations and long queues at airports in recent months, particularly during Easter and last month's half-term school holiday.

The disruption has been blamed on aviation firms struggling to recruit enough staff to cope with the spike in demand for travel, after thousands of jobs were cut in 2020 due to the coronavirus pandemic.

More recently, airlines have been urged to review their summer timetables to ensure they are "deliverable".

The Department for Transport and the Civil Aviation Authority stated that earlier cancellations are "better" than axing flights on the day of departure.

They issued a joint letter to the aviation industry calling on companies to take "all possible steps" to "avoid the unacceptable scenes we have recently witnessed".

Holidaymakers have been urged since April 2021 to leave at least 10 weeks applying for a passport after a post-Covid surge.

But minsters now admit 1.4% of applications are not being completed even within 10 weeks.

The Passport Office is currently processing around 250,000 passport applications per week.

That suggests around 15,000 a month could be taking longer than 10 weeks.

Staff numbers have been raised by 650 since April 2021 and the Passport Office is recruiting another 550.

Cases that have been waiting longer than 10 weeks can be fast-tracked but only if they are due to travel in the following fortnight.

A spokesperson for the agency said security checks "cannot be compromised" and advised people to apply with "plenty of time" before travelling.

Staff at the privatised postal giant could go on strike in the coming months, severely impacting postal and parcel deliveries.

If there is a yes vote for action, it would be the biggest yet in what is turning into a summer of discontent among workers demanding higher pay in the face of the cost of living crisis.

The Communication Workers Union accused bosses at the privatised postal giant of being “P&O in sheep’s clothing”.

The ballot for industrial action is due to open early next week.

It is tipped that the base rate, a tool the Bank of England (BoE) uses to help control the economy, was hiked from from 1% to 1.25% today.

Putting the base rate up means the cost of living eases, as soaring inflation will fall.

But this also means homeowners and loan customers pay more because mortgage firms and lenders normally pass on base rate changes in full.

The Bank of England sets the base rate in the United Kingdom every month.

The average price for a litre of petrol hit a new record high of 185.04p earlier this week.

The average price of diesel was 190.92p per litre on Sunday, having fallen slightly back from a record of 191.03p on Saturday.

The average price for a litre of petrol hit a new record high of 185.04p earlier this week
(

There were already shortages that sent fuel skyrocketing last year and now businesses are cutting off ties to Russian oil.

Luke Bosdet, the AA’s fuel price spokesman, said: “Petrol price rises should be grinding to a halt, at least temporarily, by the end of the week.

“There may still be some forecourts yet to pass on the recent surge in costs.

"If they continue to go up substantially afterwards, we will be intrigued to hear what excuses the fuel trade has this time."

Covid infections have risen in the UK for the first time in two months, according to data released last week.

Covid infections have risen in the UK for the first time in two months, according to data released last week (file photo)
(

The Office for National Statistics (ONS) estimates that one in 70 people in England had the virus last week, compared to one in 75 in Wales, one in 65 in Northern Ireland and just one in 40 in Scotland.

The jump is likely caused by increases in cases compatible with the original Omicron variant BA.1 and the newer variants BA.4 and BA.5, experts said.

Monkeypox cases have soared past 500 in the UK with Britons being warned to check for a rash.

The UK Health Security Agency (UKHSA) said yesterday it has detected 52 additional cases of monkeypox in England, one additional case in Scotland and one in Wales.

This brings the total number confirmed in the UK to 524 as of June 14.

Monkeypox cases have soared past 500 in the UK, it was announced yesterday (file photo)
(

Image:
Centers for Disease Control and)

As of Wednesday, there were 504 confirmed cases in England, 13 in Scotland, two in Northern Ireland and five in Wales.

Last week health chiefs issued new isolation guidance including social distancing – urging those with the virus to sleep in separate beds and stay at least one metre apart from those they live with.

Learner drivers have been facing huge delays while booking their driving tests due to a backlog triggered by Covid lockdowns.

In London, Birmingham and Cardiff, tests were unavailable to book online for six months, reported the BBC.

Learner drivers told the broadcaster they've paid over £200 for a practical test – more than twice the usual price – and claimed tests are being bulk booked then resold at a higher rate.

Edmund King, the president of the AA, earlier said: "The backlog does not appear to be improving. It’s incredibly difficult for young people to plan their future."

Experts have warned supplies of bottled beer could be hit by rising energy costs.

The increased cost of energy means glassware prices jumped by 80% in the last 12 months – and that means stocks of glasses have plummeted.

"Our wine and spirits suppliers from around the globe are facing ongoing struggles that will have a knock-on effect."

Meanwhile, swimming pools in Staffordshire, Essex and Brighton have started to close their doors due to a worldwide shortage of chlorine.

Chlorine suppliers have blamed the shortage on a fall in production in China, a fire at a US chemical plant, worldwide transportation issues and Brexit.

Other summertime products in short supply include Cadbury 99 Flakes, with ice cream sellers saying they are being forced to purchase alternative brands instead.

A spokesperson for the company said: "We have been experiencing some global supply chain disruptions, alongside a recent increase in demand for the product in the UK and Ireland above the levels that we had anticipated at the start of the year. "

Previous : Loved-up couples will soon be able to order a wedding cake inspired by fried chicken on Uber Eats
Next : Vladimir Putin ‘clearly’ on steroids and they’ve made him ‘dumb and aggressive’ – World News