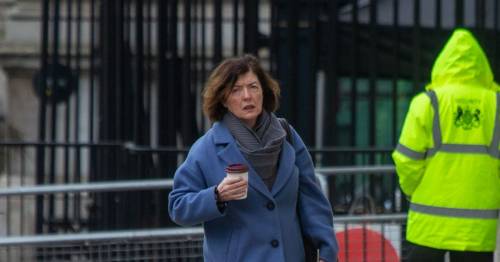 Sue Gray report: All you need to know as top official set to release Partygate findings

Top civil servant Sue Gray is expected to publish her Partygate findings this week after Scotland Yard finished its probe into lockdown bashes in Downing Street and Whitehall.

The senior official was tasked with investigating Covid lawbreaking at the heart of Government after civil service chief Simon Case had to step aside from running the probe because a party had been held in his own office.

Boris Johnson avoided receiving further fines from the Metropolitan Police beyond the penalty for his lockdown birthday bash in June 2020 – despite 126 fines being issued in total.

But the Prime Minister cannot breathe easily yet, as Ms Gray's report is expected to be highly critical of the culture in Downing Street during the pandemic.

Her report was originally due in January but its publication was put on hold after the police dramatically decided to open an investigation.

Instead, she published a short interim document where she blasted "failures of leadership and judgement" in No 10.

Here's what you need to know about Sue Gray and her Partygate report.

What is Sue Gray investigating?

Sue Gray, a senior civil servant in the Levelling Up Department, was put in charge of the Partygate investigation in December after Cabinet Secretary Simon Case quit the probe.

The civil service boss had been asked to lead the inquiry but it emerged that an online Christmas quiz had been held in his own office. He has not received a fine from the Met Police.

Ms Gray investigated events on 12 dates, including some that were not included in Scotland Yard's inquiry.

Events with an asterisk (*) were not probed by police.

Ms Gray was not tasked with deciding whether the law was broken – that was the Met's job – but to establish the facts of what happened.

When will the report be published?

Ms Gray is expected to publish her findings within the next few days before Parliament rises for recess on Thursday.

A source close to the investigation told the Mirror: "We've always said that we would publish as soon as the Met investigation concludes.

"We've also said before that we would want to do it when the House is sitting."

Officials set to be named in the report – including the Prime Minister – have been given until Sunday night to lodge any objections.

Boris Johnson and his former top aide Martin Reynolds, who organised a BYOB bash in the Downing Street garden
(

Senior staff who could be named include the PM's former principle private secretary Martin Reynolds – dubbed Party Marty after he organised the BYOB bash in the Downing Street garden.

If challenges are made, this could delay publication of the report.

But Cabinet minister Nadhim Zahawi was repeatedly unable to say who organised the secret meeting.

Ms Gray will hand over the report to Downing Street once it is ready and No10 has repeatedly vowed to publish it in the form it is received.

The Prime Minister is then expected to give a statement to MPs about the findings.

What will be in it?

Ms Gray interviewed dozens of people and pored over Whatsapps, texts, photographs and building logs to establish the facts.

She is expected to provide a narrative of the events, a detailed account of what happened and a conclusion about what the consequences should be.

It is also due to context around the gatherings, including what was said at a Covid press conference that day, what the law was at the time and what other events took place in Downing Street on the day.

It is unclear whether the report will include pictures of the events. Ms Gray handed more than 300 images to the Met Police from her investigation.

Whatever the format, she is likely to be highly critical of the culture in Downing Street.

Her interim report issued a stinging rebuke to senior staff over "failures of leadership and judgement" in No10.

She is said to have told friends that she was surprised that Mr Johnson got away with only one fine.

An ally told the Sunday Times: “Sue is not a lawyer but in her opinion the birthday party was the least egregious event she has looked into.”

It depends on the contents of the report.

Boris Johnson has vowed to make a statement to MPs once the report is published, some of whom reserved judgement on his future until the inquiry was concluded.

The PM is expected to try to cling on whatever Ms Gray's report says but his battered reputation is likely to take another blow.

Sue Gray was tasked with investigating the Partygate scandal
(

Tory MPs are nervous about two critical by-elections next month – in Wakefield, and Tiverton and Honiton – where voters could punish Mr Johnson.

The report could spell disaster for other senior figures in Government, such as civil service chief Simon Case, with reports he is likely to take the fall for the scandal.

Separately, Mr Johnson faces an inquiry by the committee of privileges over whether he misled Parliament when he claimed no rules had been broken in Downing Street.

Ministers who knowingly mislead the House of Commons are expected to resign.