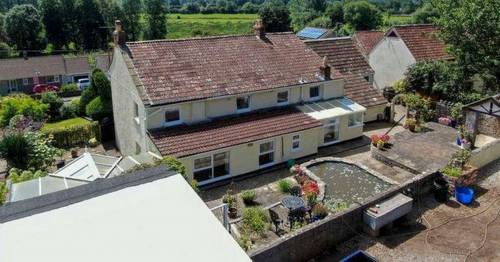 A stunning five-bedroom home with stables and a separate cottage can be yours for £1million but the garden could make you blush.

The beautiful 17th century property in Somerset has been branded the 'willy house' by amused locals.

This is because the garden has trees that are trimmed into head-turning towering phallic shapes.

The X-rated topiary has been a talking point for residents in tranquil village Cross, near Axbridge in Somerset, for the last 20 years.

Peter Knife, who owns the house, says he has never received a complaint about his seductive shrubs.

Are you the owner of a 'rude' property or is there one near you? Email webnews@mirror.co.uk

He said he wasn't the one to trim the trees into their titillating shapes and has no malice towards the original gardener.

The grandad told the Sun : "I've lived at the house for 20 years with my wife and it's always been known as the 'willy house' by children who go to school nearby.

"It doesn't bother me in the slightest. I've had people walk past my house and ask how I keep my hedges so well-maintained.

"I wind them up and tell them I put Viagra in the roots."

The home boasts five bedrooms, a stable block and a separate one-bedroom cottage
(

Estate agents Cooper and Tanner have listed the home as "a unique landmark in this rural community".

They added: "The stunning 200-year-old topiary yew trees adorning the landscaped front garden, and the elegant pale-yellow façade, belies a welcoming interior with old 'farmhouse' warmth and charm, and a plethora of original features."

Agents say the cottage is suitable as an Airbnb let.

Previous : Pumpkin farmers across US ready to deliver fun this Halloween season
Next : No Time To Die end credits scene: Is there a James Bond post-credits scene?