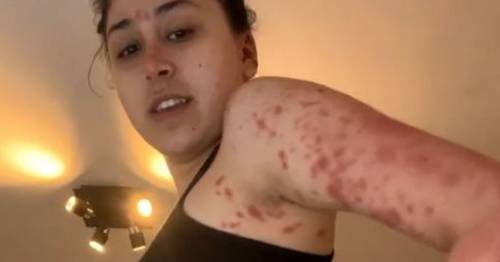 A student whose body is 90% covered in horrendous 'red raw' sores has blamed it on sharing vapes.

Emily Angel Pellegrini, 21, claims doctors said her painful condition was triggered by a sore throat, which she believes she caught from 'sharing vapes with everyone' while at university.

The drama student first visited the doctor after she first noticed a tiny scab under her boob at the start of the year but just dismissed it as friction from her bra, until it got bigger and spread across her body.

She was eventually diagnosed with guttate psoriasis, a type of psoriasis that appears as small, red and scaly teardrop-shaped spots on the skin, this month.

Doctors confirmed her tests showed glandular fever antibodies, which could also have been behind the sore throat.

The painful condition causes her skin to become itchy, crack and bleed – leaving her wanting to remain indoors to prevent it from being seen.

However, the make-up artist started posting her psoriasis journey on TikTok in a bid to help others experiencing a similar ordeal, and claims the huge support she's received has helped her come to terms with the condition.

Emily, of Poole, Dorset, said: "At university there's these vaping bars that everyone uses and everyone shares theirs around and the same drinks.

The condition is so severe it covers 90% of her body
(

"At university you're not always keeping on top of your cleaning, your diet is unhealthy and I think because I wasn't eating the correct food, eating takeaways all the time, and sharing my vapes with everyone, I got a sore throat.

"They [doctor] said that the psoriasis was caused by this sore throat, which is crazy because it was just a mild, normal sore throat that you'd get in the winter.

"I think that sharing vapes was definitely the cause. I remember I would share a vape with someone and then the next day I'd have a sore throat and I'd be like 'oh, I'm not doing that again'.

"And then I would just forget, share it and then would keep constantly getting sore throats, so I reckon that's not something to do anymore."

Emily said that psoriasis 'feeds off' stress and a breakup in January coupled with having to miss some of her classes on an intense drama course as she became unwell.

Emily said: "It was just a tiny scab under my boob and I thought it was maybe my bra rubbing on my skin and that I needed to get a new one, so I didn't really think anything of it and thought it would just go away.

Guttate psoriasis appears as small, red and scaly teardrop-shaped spots on the skin
(

"So I got new bras and completely forgot about it. I remember one day I looked and it had gotten bigger and had spread a little bit.

"That's when I told the doctors and they just gave me cream and didn't tell me what it was. I Googled what the cream was and it said it was for psoriasis and I started to panic a bit.

"I went to the doctors and it had spread quite a lot, it was all around my boobs and hips at this point but it was mild, and he gave me this steroid cream but it somehow made it worse.

"I went back to uni after Easter and because it was the last month after uni, I was going out clubbing a lot, drinking, not getting enough sleep, my diet was bad and all of that just made the psoriasis blow up and it became really painful."

In order to help with Emily's psoriasis she applies cream on her body three times a day.

"Imagine your skin being so dry that it's cracking and bleeding, it's like that. It's like when you have a dry lip and you open your mouth and the corner slits, it's like that but on my hip.

"It kind of looks like a sunburn or oven burn, but with scales on top of it.

"I can't sleep at night because it's so itchy and uncomfortable so have been given sleeping tablets from my GP because otherwise I'll be up all day and all night.

"I love taking pictures but having psoriasis has stopped that. I don't want pictures of me and I don't really want to leave the house or go on dates or anything – I don't want to meet anyone.

"I don't want people to see me, look and stare at me because it is quite an unordinary thing to see.

"In the past month or two, I've cried at least five times a day about it.

In the past month, despite the warmer weather, she said she's been completely covering up her body with jeans and baggy tops.

Emily said: "It's quite hard to cover up because it is everywhere but I try my hardest to cover as much as possible, I don't really let it out. I try to not let people see it.

"It's weird though because I have no problem with me showing it on TikTok but when I'm in person with someone I'm scared of them seeing it.

"I didn't want anyone else to feel how I did.

"I wanted someone to be able to look up psoriasis and find my videos and get help from it because I couldn't find any. So I thought well, I might as well do it myself.

"Ever since making the TikTok videos and having so many lovely boys and girls messaging me saying that they suffer with it too, offering me loads of advice and telling me that I've helped them.

"I do feel like it's a part of me now and something that I have to come to terms with and live with.

"If I didn't make those TikTok videos then I probably wouldn't feel like that because the amount of support I got for strangers all over the world, it's made me feel so much better."

There's now light at the end of the tunnel for Emily as she's hoping starting immune suppressant medication will help clear her skin within a few weeks.

Emily said: "Ever since I've been told that it would disappear, I kind of look at it and am like 'ok, you're not here for long' and I'm not going to make myself upset about it because that will make it flare up.

"Loads of people have messaged me and said that I'm inspiring them and making them feel good about their skin.

"For anyone out there also suffering from psoriasis, no matter how big or small the flare up is we are all beautiful.

"It doesn't define us or make us any different and we should embrace it as it's a part of us and our beauty."

Previous : London walking map: How long does it take to walk between Tube stations ahead of strike?
Next : Vladimir Putin’s war machine will see world become ‘hell on earth’ if not stopped – World News