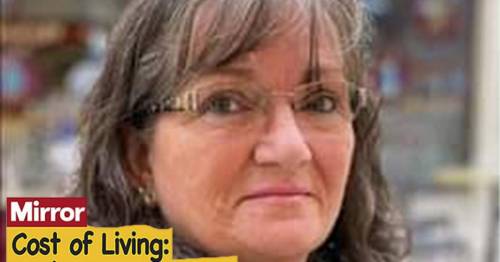 One is a single mum who can no longer afford after-school treats for her kids, one a pensioner who has started getting up early to wash clothes on Economy 7.

Another is a full-time carer of her two autistic children who has been wearing seven layers to avoid turning on the heating.

The Daily Mirror’s Cost of Living panel is made up of ordinary people from all walks of life who, like the rest of us, are feeling the pinch and having to cut back as prices continue to soar.

Over the following months they will be keeping us updated on how rising costs are affecting them and their families.

Claire Pulfrey with her prepay meter
(

FEELING THE PINCH: With arthritis and other joint problems, Claire has to keep the house warm, but she has most noticed the rise in her energy bill, along with her food shopping. Both she and her youngest son have regular hospital appointments in Grimsby, which now adds at least another £50 to their spending.

CUTTING BACK: Claire says: “I’ve had to cut down on treats for the boys, even small things like sweets or a bar of chocolate after school, and we’ve had to cut down on days out, because even if you go to the beach you have to pay for the bus journey. I pay for gas and electricity on a meter but what I used to put on now lasts for half the time. I’m worried because even if it rises by an extra £10 I’ll have to decide between switching off the heating or cutting down on the food we eat.”

Disabled mum-of-two Tracy, who suffered from fibromyalgia, lives in Cheshire with her husband and full-time carer Paul, 56. The couple’s two adult children, Hanna, 32, and Adam, 29, are both autistic and live with them.

INCOME: With employment and support allowance and Personal Independence Payment (PIP), the household receives around £2,500 per month.

FEELING THE PINCH: Tracy, who used to work in insurance, says they never have much left over at the end of the month, but their energy bill has now skyrocketed from £333 to £640 a month. She says they cannot move to a smaller home that might cost less to heat because if they do daughter Hannah, who is severely autistic, would have to go into full-time care.

CUTTING BACK: Tracy says: “We’re trying our best to cut down. On the days the kids are out at the care facility we switch of the heating and wear seven layers to keep warm. We’ve been buying more own-brand products to try to keep the supermarket costs down.”

Mum Cecile, a blogger and content creator, lives with partner Ken, who works in advertising, and their six-year-old son Stanley in Ashford, Kent.

FEELING THE PINCH: Because they live in the countryside they have to use their car to take their son to school and other errands, and this is where they have seen their costs most rise, spending between £35-£50 a week.

CUTTING BACK: Cecile says: “We know we’re not as affected as many people, but we’re now thinking twice about buying things. We don’t have a lot left for hobbies or extras, we don’t go out for lunches or dinners and we’re not going to have a nice holiday this year. Sometimes I have to go to London for work, but I’ll only go now if a client pays my travel.”

Single Greg used to work as a computer engineer until he suffered a mental breakdown in 2014 and is now unable to work. He has three grown-up children and lives in Garthrorp, a rural village near Scunthorpe, North Lincolnshire.

INCOME: Greg receives around £1,300 in benefits, which normally leaves around £300 to live on after paying his bills.

FEELING THE PINCH: He has most noticed the cost of food and fuel going up, with his energy bills rising from £50 to £120 a month, and he’s already in debt on his electricity bill. Living in a rural area means running a car is essential, but whereas before £10 would last 100 miles, he says he’s now putting £20.

CUTTING BACK: “I’m constantly thinking, do I need to make that journey, what journey can I avoid,” says Greg. “I try to combine journeys, so I’ll wait until my hospital appointment to go and do some shopping or see my family. That has a knock-on effect on my metal health, because I’m not going out as much. I’ve also got an allotment in Scunthorpe but I’m thinking of giving it up because I can’t afford to be driving down there.

“I don’t buy things that take a lot of time to boil and I’m not making fresh food. I’ve had to go down that route.”

Ganesh, who was born in India, rents a terraced house in Ashton-under-Lyme, near Manchester, with his wife Usharani and six-year-old daughter

INCOME: Ganesh’s family’s income comes from his salary as an IT worker is £2,400 a month.

FEELING THE PINCH: He says his utility bills have gone up three-fold, from £67 to £195 a month, while his food shopping has increased by 20% and petrol by 40%. While he is currently working from home, he’ll soon have to travel to his office, eight miles away, three days a week while will further increase costs.

CUTTING BACK: Ganesh says: “We used to have takeaways twice a week, but now we only do that twice a month. We have also started turning the heating off, we just have it on four an hour in the morning and an hour in the evening. Everything’s going up. Where we live a terraced house used to cost around £550 a month to rent, but now it’s £700.”

Single mum Stacey lives with her 14-year-old son Nehemiah, in Greenwich, southeast London. She is starting her own childminding business with the help of a JobCentre programme.

INCOME: Made up of her childminding work and benefits, Stacey’s income is around £1,100 a month.

FEELING THE PINCH: Stacey pays for her gas and electricity by pre-pay meter, and says that while £10 on gas used to last a week, she now has to put £20. And she says the amount she spends on food has at least doubled.

CUTTING BACK: Stacey says she has had to cut back on all her spending, including certain activities her son was taking part in and other expenses. “It makes me feel bad,” she says. “I’ve been trying to find free alternatives, and when I’m food shopping I’ve learned how to make every penny count by buying different things in different places where I can get a better bargain.”

Retired Peter, a former NVQ assessor, and his wife Jayne, 65, own their own home in Nottingham.

INCOME: Peter receives £812 a month from his state pension, while Jayne receives a private pension of £400.

FEELING THE PINCH: Peter has noticed his grocery and energy bill rise the most sharply, especially electricity which has gone up from £65 to £120 a month. With everything in his house running on electric, it’s the bill he fears rising the most when his fixed rate ends in June, swallowing up his 3.1% pension rise.

CUTTING BACK: Peter says: “We’re doing everything to keep bills down. We get up early to wash clothes on cheap rate electricity, we’ve turned the heaters off and closed the doors in some of the rooms and we’ve stopped going to Tesco and instead do our shopping in Aldi or Lidl.

“I’ve tried to apply for discounts, but most are for people on benefits and don’t apply to me. I feel I’m being punished because I worked hard and saved hard.”

Peter Marciniak receives £812 a month from his state pension

Single mother Carly works four days a week as a senior manager for a national charity, and lives with her four-year-old son Ezra in New Cross, south east London.

FEELING THE PINCH: Carly says it’s getting more expensive to keep her son entertained. “It’s difficult just to go out with him in London, travelling, eating and drinking. If you go to a soft play you’ll pay £7, and with travel and a snack you might spend £15-£20 for an hour and a half.”

CUTTING BACK: Carly says: “I’ve become good at finding free things to do, and we walk to quite a lot of places. As a single parent it’s essential to get out doing things and seeing people. I’ve also started selling personal items on eBay, and I’m trained in neurolinguistic programming so I’ve doing coaching at night to bring a bit more money in.”

Jen and husband Jonathan 49, live in Mansfield, Notts, with their five children aged three to ten.

Jen Derrick, from Mansfield, and her five children

FEELING THE PINCH: The couple had been trying to save to buy a home, but their annual gas and electricity bills going from £1,428 to £2,928 means there will not be enough money for that.

CUTTING BACK: Jen says: “The next 12 month will be very tight, especially with the news Jonathan’s wage is to be cut, but we consider ourselves fortunate to still have an income.

“It’s my job to now make sure we really get the most out of every penny, so I will be shopping round for better deals on things like phone and internet. I’m batch-cooking the family’s favourite meals so we don’t waste anything, and we are trying to cut down our food shopping to once a week and make do with whatever we have in between. But it’s hard, we won’t be having a holiday this year and there’s just no budget for things like birthday parties.”

Previous : Ground rent to be completely banned – how it affects you and what homes are included
Next : Inside the heroic Amazon tribe who took on monster diggers ripping rainforest apart – World News