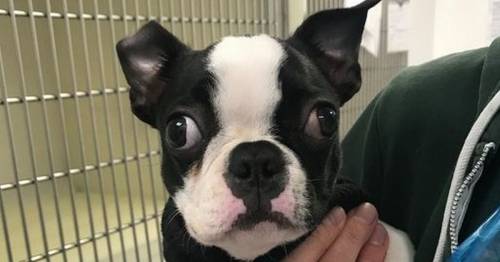 An adorable rescue puppy has found stardom after being born with a rare breed defect that left her with huge googly eyes.

One-year-old Flora was picked up off the streets of Bristol and taken to local charity Bristol Animal Rescue Centre early last year.

She was found with an injured leg and a condition named macropalpebral fissure euryblepharon, which meant her eyelids weren't big enough to cover her large eyes.

After multiple surgeries funded by charity supporters, tiny Flora was nursed to perfect health and put up for adoption.

Vikki Carter, from Brislington, fell in love with the Boston terrier and took her home, where she's "settled in really well" with the family – and has even found fame.

The charity fell in love with her big brown eyes
(

Vikki said: "She is enjoying finally being a puppy and has been on lots of adventures. She has made lots of dog friends at the local park and is a very happy social puppy.

"She makes us laugh every day with her funny personality and quirks.

"Her favourite place is on the sofa for cuddles when she is not trying to steal our shoes! After having been through such a lot, I love seeing her thrive and learn new things every day.

"She is very much loved and we are so glad she is part of our family."

Vikki was so proud of Flora that she entered her into the Dog Day Afternoon competition, launched by local brewery, Lost & Grounded.

The company was looking for dogs to feature on its new beer can designs and Flora was one of six dogs eventually chosen for the advertising campaign.

The new beer, which launched on the weekend, is a Kölsch, 4.8% Cologne-style ale.

Flora was one of six top dogs on the advertisement
(

Animal Home Manager at Bristol Animal Rescue Centre, Jodie Hayward, said: "It’s not often that one of our dogs becomes famous, but if anyone deserves to be recognised for everything they’ve been through, it’s Flora.

"She’s a very special pup and one that we’ll all remember here at the Rescue Centre for a long time."

Annie Clements, Co-Founder of Lost & Grounded Brewery, said: "We are thrilled that Flora was able to enter our dog beer label competition and after we heard her story we were really touched. She’s certainly a trooper!

"The main reason for making this beer was to raise awareness of the welfare and care of our pets and the importance of their company. Thank you, beautiful Flora, you are an absolute superstar!"