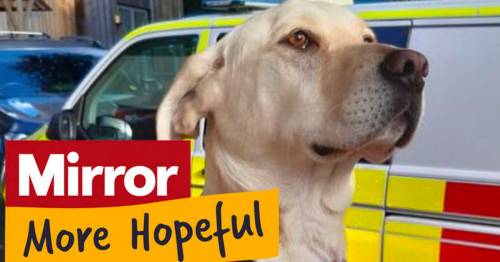 A stray labrador who was feared to be a "lost cause" is set to become an expert fire service search dog after being adopted.

Essex Fire Service dog handler Graham Currie came to the rescue after the Dogs Trust in Loughborough appealed for someone to adopt the pooch.

The expert admitted he was initially worried as labradors can be "greedy", and offered to take Bailey on a six-week trial initially.

But the pair have got on well, with Graham dubbing the 18-month-old pooch one of "the most natural search dogs I've ever seen."

Louise Crawford, the animal welfare scheme coordinator at the charity, united the pair after putting out an appeal to rescue services, to ask if anyone was looking for a new search dog.

Bailey has proven everyone wrong
(

Mr Currie said he had been looking for "just under a year" when he heard about Bailey.

He said: "After testing Bailey's drive for a tennis ball and checking he had no aggression towards other dogs or people, I offered to take him on a six-week trial.

"The biggest thing was getting him in the van because he associated it with being taken to a compound, but within 24 hours he was taught to associate it with fun.

"By the third day, I was 95% sure he was the one. In the vehicle barn, there was a rugby ball on a ledge above the gym weights and he wouldn't give up until he got it – that's the kind of determination we are looking for in a search dog.

"I was reluctant to take a labrador as they can be greedy and distracted with food, and I was looking for a springer, cocker or sprocker spaniel bitch because I've found they are less stubborn and easier to train.

"Bailey has got that drive though and he's not greedy, he'd take a ball over a bowl of food every time."

Graham says Bailey, who is 18 months to two years old, has excelled at search and rescue activities. He has completed seven days of UKISAR training in buildings and rubble piles with police and national assessors.

Graham said: "To start with, we were hiding tennis balls to see if he would find them without being scared of the rubble. He is one of the most natural search dogs I've ever seen – he's like a mountain goat! Nothing fazes him, he has no fears or phobias.

"A police trainer and colleague said if we could clone this dog all our problems would be solved.

"He was described as unruly, untrainable, unsociable, rude and stubborn. But a dog that cost us £185 has turned out to be the most incredible creature."

It usually takes 18 months to three years to train a dog but Bailey, whose nicknames are Beast from the East and the Polar Bear, because of his size, could be "on the run" as early as next April.

Graham, who is based at ECFRS’s USAR site in Lexden, Colchester, added: "We've landed on our feet with Bailey – and so has he, because he has a lovely home now."

Previous : “I kicked a player out of our Dungeons and Dragons group because she couldn’t do maths”
Next : Tories ‘write no confidence letters in Boris Johnson’ – but Raab says it’s ‘tittle tattle’