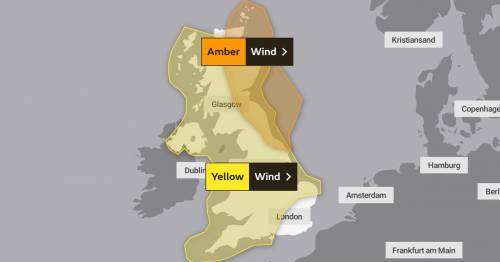 Strong winds could cause flying debris, power cuts and a danger to life overnight from Friday into Saturday, the Met Office has warned.

An amber warning for wind has been issued with the forecaster naming the weather system 'Storm Arwen' – the first of the winter season.

The Met Office has said roads and bridges could close, power cuts are likely and mobile phone coverage could be knocked out by the extreme weather.

The amber warning – meaning lives are in danger – covers much of central and the east cost of Scotland with the north east of England also in the area most at risk.

Winds of up to 80mph in coastal locations are coming with severe gales threaten to cause widespread travel disruption this weekend.

The Met Office warn of the risk of travel chaos with longer journey times and cancellations likely.

Flying debris is likely and could lead to injuries or danger to life, probably damage to trees, temporary structures and buildings, such as tiles blown from roofs, they explained.

There could be 80MPH winds in coastal areas, Brits have been warned
(

The Met Office's Tom Morgan told the Mirror some snow lovers could be left disappointed and says precautions must be taken to battle the storm.

"Not everyone will see snow, over the coming days It will be really cold petty much everywhere, especially after dark," he said.

"But there is a concern and we have issued a weather warning for coastal areas with very strong winds predicted.

"People may want to consider their travel plans and ensure their garden furniture is tired down, because winds could reach 80MPH."

With some expected to see snow, it is going to be a challenging few days
(

It comes as parts of the UK are also set to battle snow showers.

Experts have predicted temperatures as low as -2C could be felt in parts of the country, with snow potentially falling in most regions.

Although flurries are likely, the likelihood they will settle is not.

However, in parts of Scotland, the Met Office say up to 20cm may fall.

The warnings cover the UK on Saturday

The freezing temperatures are expected to last for around 10 days.

Forecasters at WX Chart say that by Friday, people living as far down as the West Midlands could se up to 6cm of snow.