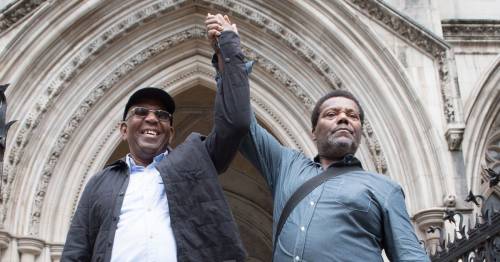 A fourth member of the Stockwell Six has had his name cleared 50 years after being framed by a bent detective.

Texo Johnson was 17 when and his friends were falsely accused of trying to mug Det Sgt Derek Ridgewell, later unmasked as one of the UK’s most corrupt officers.

Mr Johnson was cleared by the Court of Appeal at a hearing in the Royal Courts of Justice in London.

Sir Julian Flaux, sitting with Lord Justice Dingemans and Lady Justice Andrews, said it is “most unfortunate that it has taken nearly 50 years to rectify the injustice”.

Arrested at the south London tube station during a night out in February, 1972, all six pleaded not guilty, but all except one were convicted, despite telling jurors that police officers had lied and subjected them to violence.

Derek Ridgewell was convicted for conspiracy
(

The Criminal Cases Review Commission, which investigates miscarriages of justice, referred Mr Johnson’s conviction for assault with intent to rob to the Court of Appeal after judges cleared the names of three of his friends.

Courtney Harriot, Paul Green and Cleveland Davidson, now in their late 60s, saw their convictions ruled unsafe by the court in July.

Judy Khan QC, representing Mr Johnson, who now lives in the US and did not attend the hearing, said it was a “truly shocking” case.

Ridgewell was investigating mailbag theft, when he joined two criminals in splitting the profits of stolen mailbags. He was jailed for seven years, and died of a heart attack in prison in 1982 aged 37.

His corruption has led to eight wrongful convictions being overturned by the Court of Appeal.