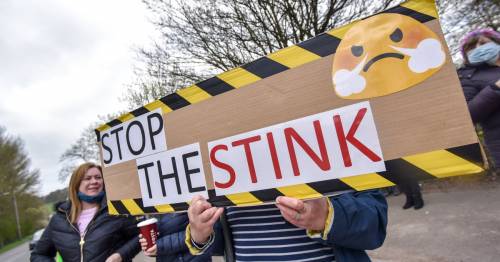 Brits living near a controversial landfill site are stuck indoors today because of an eggy stench coming from the rubbish dump.

Residents in Silverdale, North Staffordshire, claim they cannot open their windows because of the foul smell and the risk of flies coming inside.

Neighbours say the stench from Walleys Quarry is so bad it can sometimes make them feel sick, StokeonTrentLive reports.

It means many in the area will not be able to lounge in the garden as temperatures soar today.

Donna Lovatt, who who lives within a mile of the quarry, is among those affected.

She said: “When the weather ’s hot we have to shut the windows because of all the flies, it's terrible.

A eggy stench emanates from the site, residents say
(

"It’s gotten worse over the years. We know the warm weather is coming and we can't enjoy it.

“Sometimes, we do tend to sit in the garden but a lot of the time we have to come in because the smell is that bad, it’s eggy.

"They’re putting the road sweepers out to help with the debris off the wagons, but all it’s doing is pushing all the rubbish into the bushes.

“The smell is that bad it stinks like excrement. It can be really horrendous, it makes you feel sick.

"We can’t open the windows at night time either."

Builder Ashley Hawe lives within half a mile of Walleys Quarry. He said: “It’s going to be terrible. I’ve got a little daughter and my missus.

"Some days you can’t smell it and some days it’s really bad, mostly in the summer when it’s hot.

"When it’s bad you have to shut your windows and your doors. You can’t go outside because it smells of egg.

“And why would you want to go outside when you can see that mountain of waste?

"When it’s sunny we have to go somewhere else. We’ve lived here for six years.

"It’s a nice neighbourhood here, everyone’s lovely but you can't do anything about the smell, if you complain they just fob you off.”

Peter Malam also lives a short distance from the quarry.

He said: “I’m playing golf this weekend so I won’t be here. I think it just destroys your smell. My smell isn’t like it was when I was 40.

“I played golf at Wolstanton about two weeks ago, I could smell it up there but I couldn’t here. I don’t know if it hangs in low areas.

"I think it’s strange that they’re allowed to build right next to it.”

John Beresford and his wife had to complain one bank holiday when it was hot.

He said: “It was really bad. It tends to get worse at the bottom of the road.

"Our son always turns the recycle function on his car before he arrives so he doesn’t get the smell. It was awful.

“Before, we even had a bloke up here, he was a gas engineer, he was walking up and down the road, he said it smells like a gas leak.

When we contacted Walleys Quarry about the rising temperatures and the problems it would cause, they responded: "As the Environment Agency’s own reporting data shows, emissions levels have reduced significantly due to ongoing efforts made by Walleys Quarry Ltd.

"Emissions are at a very low level the vast majority of the time.”