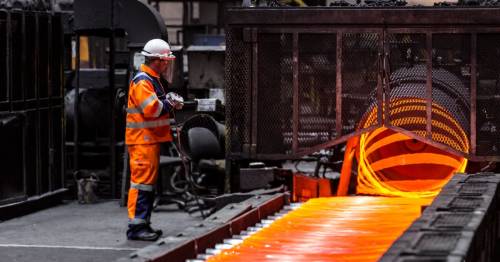 Steel campaigners were celebrating today after measures to protect the UK industry looked set to be extended.

But today the Government confirmed it wanted to extend for another two years measures on 15 steel products to protect domestic steelmakers.

The Government said in a statement: “Removal of the steel safeguard measure would likely result in an increase in imports and therefore would result in serious injury or the threat of serious injury to UK steel producers.”

The US and EU are also keeping in place measures to defend their steel sectors.

UK firms feared the Government could water down British defences and spark a new flood of cheap products from overseas.

Its director-general Gareth Stace said today: “The Government’s interventions will guard against anticipated surges in imports from trade diverted away from the US and EU markets that will remain shielded for years to come.

“Such surges would have risked jobs, investment, and our ability to transition to net-zero.

“With high-paying steel jobs concentrated in Yorkshire, Humberside and South Wales, maintaining the safeguard is also critical for the Government’s levelling-up ambitions.”

Mr Stace admitted the extension “was not straightforward”.

But he added: “This is not sufficient reason to shy away from using the trade tools now at our disposal and the Government has done the right thing today in staying the course and ensuring the UK’s steelmakers are not left to the mercy of a global steel market that suffers from overcapacity and state-induced distortions.”

“This is a foundational sector for the UK’s national interest, as well as a cornerstone for jobs and communities across the country.

“Similar protections are in place for the EU and the US.

“However, the Government should be doing more to make our steel sector secure for future generations and have a plan in place to prevent any further last-minute extensions of key measures.”

The Mirror has been campaigning to Save Our Steel since 2015.

The Mirror has been campaigning to Save Our Steel since 2015

The sector directly employs 33,700 workers and supports another 42,000 posts in supply chains.

It is worth £2.1billion to the UK economy.