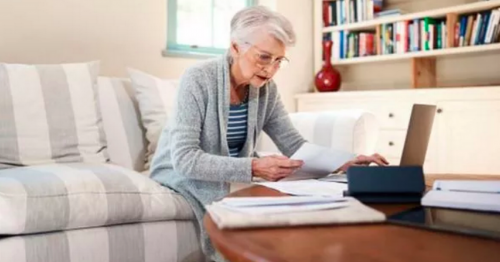 The state pension will rise by “significantly” more than inflation next year while millions of Brits see a real-terms wage cut, the government has confirmed.

Downing Street repeated the pledge that the triple lock on pensions – which raises them by the highest of 2.5%, average wages or inflation – will return in April 2023.

And Chief Secretary to the Treasury Simon Clarke said in a written answer to Parliament that this was “likely to be significantly higher than the forecast inflation rate for 2023/24”.

This is because annual pension rises are based on CPI inflation each September – seven months before they actually go up.

Benefits are also likely to rise by inflation.

Campaigners would have been horrified if the triple lock – already suspended for one year in breach of the Tory manifesto – had been paused again.

But Boris Johnson and Chancellor Rishi Sunak today suggested more than 5million public sector workers will get rises of less than inflation, a real-terms wage cut.

With teachers’ and nurses’ pay reviews due to report back imminently, Boris Johnson told his Cabinet “the public would expect the government to stick within their means at a time of global cost of living pressures.”

The PM’s spokesman confirmed he agreed with Chief Secretary to the Treasury Simon Clarke, who said it will not be “sustainable” to raise public sector pay by 9% or 10%.

That will mean a real-terms pay cut for millions of workers – risking a Summer of Discontent as strikes spread. Pay is one of the issues RMT rail union members are striking over, alongside conditions and 2,500 maintenance job cuts.

But Mr Sunak “emphasised that the government had responsibility to not take any action that would feed into inflationary pressures, or reduce the government’s ability to lower taxes in the future”, No10 said.

The PM’s spokesman confirmed he agreed with Chief Secretary to the Treasury Simon Clarke, who said it will not be “sustainable” to raise public sector pay by 9% or 10%
(

Asked if public sector workers should just accept they’re going to get a real terms pay cut, Boris Johnson’s spokesman replied: “We will have more to say once we’ve got [pay review] reports in.

“But you will have heard Simon Clarke yesterday talk about the importance of not feeding into inflationary pressures, and that point was emphasised by the Chancellor again today.

“And the Prime Minister does very much agree with that.”

Downing Street today defended the difference of treatment between nurses and pensioners.

“They can’t always increase their incomes through work, and they are more vulnerable to cost of living pressures.

He also argued that when pensions go up, “there’s not the same risk of a spillover effect into private sector wages” – the so-called “wage-price spiral” that feeds inflation.

When he gave his written answer yesterday, Treasury minister Mr Clarke said the triple lock would be “subject to a review” by ministers.

That has sparked some speculation it could be dropped when the scale of rises becomes clear.

But asked if he could absolutely guarantee pensions will rise with triple lock next Spring, Boris Johnson’s spokesman replied: “That is exactly what the Treasury set out in a written parliamentary question this morning, that yes it is a temporary cut.”

Previous : Boris Johnson suggested TWO plum jobs for wife Carrie – including one with the royals
Next : GP crisis ahead with mass exodus of 19,000 doctors predicted in next 5 years