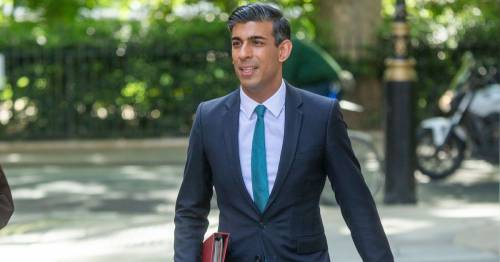 Retirees are set for the biggest-ever increase to their state pensions next year – but only if the cost of living stays high.

Chancellor Rishi Sunak said the record hike would be due to inflation, which affects state pension increases.

Sunak yesterday unveiled an extra £15billion help for the cost of living crisis.

Prices are rising at their highest rate in decades, leaving families struggling to make ends meet.

Those price rises have led to inflation hitting 9% , and it is due to top 10% later this year.

But Sunak told MPs that high inflation had a silver lining for state pensioners and people on certain benefits.

Benefits like the state pension, Universal Credit and 'old-style' benefits like disability support and Jobseeker's Allowance go up every April in line with inflation the previous September.

Sunak said: "I can reassure the House that next year, subject to the review by the Secretary of State for Work and Pensions, benefits will be uprated by this September’s consumer prices index, which on the current forecast is likely to be significantly higher than the forecast inflation rate for next year. Similarly, the triple lock will apply to the state pension."

State pensions are overseen by the DWP
(

The triple lock is a government promise that the state pension will go up every year in line with inflation, 2.5% or earnings growth, whichever is highest.

The promise does not apply to expat Brits in certain countries , such as Australia and Canada, whose pensions are frozen at the point they left the UK.

The chancellor said: "Now, that is likely to be a relatively high inflation in September.

"So that's what will happen next year for everyone's benefits and pensions, that increase is going to, most likely, be significantly [more] than the inflation we will see next year on all the forecasts that are available."

Sunak yesterday announced the government is handing out an extra £15billion pot of money to help households through the cost of living crisis.

This includes a £400 discount to energy bills, £650 for people on means-tested benefits, £300 for pensioners eligible for Winter Fuel Payment and £150 for disability benefit claimants.

Almost all Brits will get some Government cash – but some could get nothing at all.

Shadow Chancellor Rachel Reeves said Mr Sunak had finally woken up to the pressures facing families – and said Labour was "winning the battle of ideas in Britain".

Lewis put several readers' questions to the chancellor – as well as telling him that the energy market was "broken", with consumers unable to find good deals.

Previous : Child Benefit cash hits bank accounts early – reason why payment made revealed
Next : Up to 1,000 GPs could be deported as Home Office threatens to force them out of UK