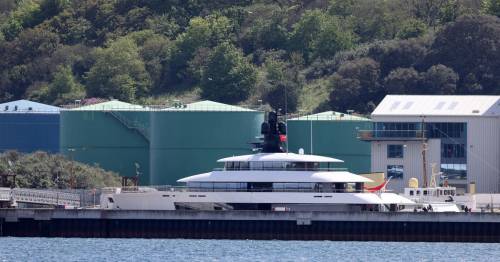 The vessel, which is named Pi, boasts a swimming pool and its own helipad.

The yacht was spotted in Falmouth harbour on Wednesday morning, before it moved to Pendennis Shipyard later in the afternoon.

It was also the 195th biggest yacht in the world.

Its mighty size means it can host up to 12 guests and 18 crew members in 16 cabins.

Pi is reportedly the 195th biggest yacht in the world
(

Its two engines make it capable of speeds up to 18.4 knots, the Sun Online reports.

Pi is home to a glass-bottomed swimming pool and onboard spa facilities, as well as its own helicopter landing pad.

It also features a striking spiral staircase between its floors, as well as a huge open living space with a sofa to seat eight.

The yacht, which was previously named Syzygy 818 and weighs 1,592 tonnes, belongs to American businessman Schultz.

The yacht docked at Pendennis Shipyard in Falmouth for works
(

The 68-year-old is estimated to be worth £2.9billion, having amassed his fortune through coffee chain Starbucks after taking charge in the 1980s.

Today, the 68-year-old is ranked as the 793rd richest person in the world, according to Forbes.

There have been rumours he would run for US president in 2020, reports The Sun.

However, he later said he was “a long way from making any decisions”.

It is understood that Schultz’s yacht could be undergoing maintenance work at Cornwall's Pendennis Shipyard.