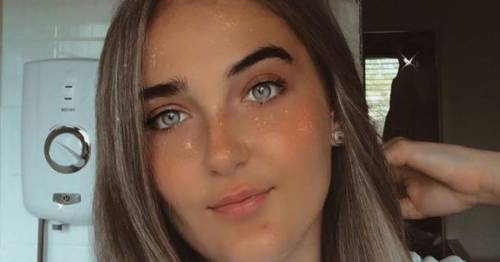 A stalker teen followed her former lover to Benidorm and scratched 'nonce' on his car bonnet after they broke up.

She met David McDermott at a pub in summer 2020 and they began a relationship in 2020 just weeks after her 18th birthday.

But the 19-year-old was furious after the 42-year-old ended their relationship and smashed windows at his ex-partner's home.

Before their affair, Armes and McDermott knew each other from Eccles College, where he had been her student support officer.

And their relationship started after the pair later met at a pub, the Manchester Evening News reports.

Armes followed him outside and told him she had 'fantasised' about the pair having sex, prosecutor Gavin Howie told Manchester Crown Court.

Armes, 19, who appeared in court after admitting stalking
(

"He says that he took her to the Ivy Mount Hotel and had sex with her," Mr Howie said, according to Manchester Evening News.

"The following day, he says, he transferred money to her bank account for drugs she supplied him."

Mr Howie said Mr McDermott admitted he had been drinking heavily and took cocaine, which the man put down to his poor mental health.

His mental health continued to be an issue after their first encounter, Mr Howie added.

"He says he was struggling with his mental health so he went to Benidorm [alone] and drank and took drugs," the prosecution added.

"He received a payment of four pence and one pence [from the defendant] saying 'call me now' and 'bell me now'.

"He says she came to Benidorm but, he says, nothing happened while she was there."

After the trip, Armes, of St Marys Road, Eccles, rang Mr McDermott's ex-partner — the mother of his children.

Following this, contact between the pair ceased for some weeks until Armes emailed Mr McDermott in September 2020, claiming to be 'sleeping rough'.

"He did not reply," Mr Howie told Her Honour Manley. "He rang her the following day and told her to stop emailing.

"They arranged a meeting in the Milton Hotel [in order] to 'get what she wanted'. They had unprotected sex. She was annoyed that he brought protection.

"She then placed material on Facebook saying she was pregnant."

This incident was the last time the pair had sex, as Mr McDermott told Armes to stop contacting him.

In November 2020, Armes then messaged his ex-partner about their relationship, who confronted him.

Armes also told his employer and McDermott was later sacked from this position for gross misconduct.

Despite this, Armes continued to message and call Mr McDermott — leading him to change his mobile number three times, after she repeatedly contacted him on unknown numbers, or by using someone else’s phone.

The court heard how Armes later went to his ex-partner’s house while Mr McDermott was visiting, then damaged windows, and scratched the word ‘nonce’ into his car bonnet.

Representing Armes was Jayne Miller, who told the court her client had a troubled upbringing, with the family forced to relocate to Wales after being fire-bombed.

“She has had a difficult background,” Ms Miller said.

“Her family were firebombed, and were moved out of Salford to Wales, into a one-bedroom property and [were] not able to leave each others’ company, being protected by the safeguarding team.

“She came back one year later and went to a different school. She is young and socially isolated and has what appears to be emotionally unstable personality disorder.”

Ms Miller added that Armes now says she ‘hates’ Mr McDermott, and does not wish to be in contact with him again.

Sentencing her to a community order and restraining order, judge Hilary Manley said she offered Armes ‘a chance’.

“You are clearly remorseful and have made efforts to improve your future,” she said.

“There can be no excuse for harassing any person. It is totally destructive and pointless.

"Your actions also caused distress to his children. That is unacceptable.

"I am giving you this chance. Do not squander it.”

Armes pleaded guilty to one count of stalking. She was sentenced to a two-year community order, with 30 rehabilitation days, and handed an indefinite restraining order against the victim and his family.