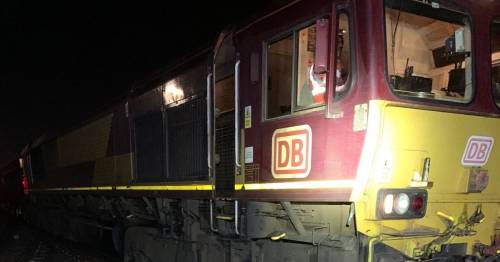 A freight train has derailed between London and Kent, causing chaos for those travelling from St Pancras.

Network Rail apologised to passengers who were delayed this morning, and said a low speed derailment took place at the Hoo junction.

A spokesman added that "one wheel has come off the rails and some wagons are blocking the down line."

They company tweeted to say: "Our teams have sourced a rescue locomotive and driver who should be on site shortly.

"Then they will attach to the wagons blocking passenger trains and pull them clear and back into the sidings.

"We’re aiming to have the train cleared by around 9am.

"However, these recoveries can prove tricky sometimes so please continue to check before you travel for the latest info and alternative options."

Although lines are now clear of the freight trains and the rescue vehicles, delays and cancellations are still expected into the afternoon.

A Southeastern spokesman said: "A freight train derailed earlier this morning within the depot, but it blocked the line from Gravesend to Rochester while it was moved.

"Network Rail teams have now moved the affected train back into the depot, so all lines have now reopened.

"Trains can now run again in both directions, with the 08:25 service from St Pancras to Ramsgate being the first train to run towards Rochester.

"Trains in both directions may still be disrupted while we work to get trains back on time again, so some services may still be amended at short notice."