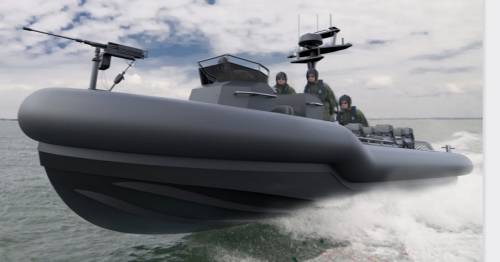 The high-speed, £1million Stormblade, which can carry six commandos, proved unsinkable in trials with its self-righting hull.

The SBS needs a boat for counter-terror ops around the UK as fears grow of suicide attacks and hijack attempts on ships in our waters.

The SBS must also be able to support operations behind enemy lines, ­sabotage missions, rescue hostages and intercept hostile targets.

The is designed to be airlifted into action by Chinook helicopter or parachuted from a C-130 Hercules.

Nicknamed the Interceptor, it has radar, electronics to destroy remote-controlled bombs, a night-vision system and its crew can speak to supporting aircraft and warships.

The low-profile, rigid-hulled ­inflatable, which has remote-controlled front and rear machine guns, would replace the Pacific 950 used by the SBS.

Interception by fast boat is the hallmark of SBS ops. In 2020, 16 SBS troops stormed the Nave Andromeda off the Isle of Wight and took it from Nigerian stowaway hijackers in just nine minutes.

A senior source said: “If our people need to intercept a boat and rescue British nationals they need speed and surprise. Fast, smart boats deliver that.”