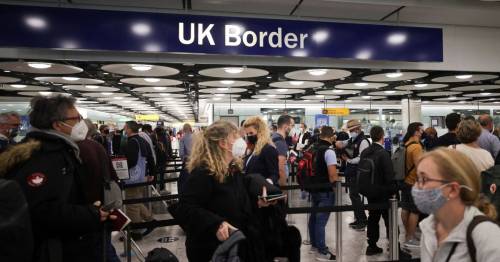 Six countries are to go on the UK's red list as a new Covid variant has been described as the "worst we've seen so far".

Health Minister Sajid Javid has confirmed from noon on Friday flights from South Africa, Namibia, Lesotho, Botswana, Eswatini and Zimbabwe will be temporarily banned and UK travellers must quarantine.

The red list was scrapped earlier this month when all countries were taken off it.

Scientists sounded the alarm on Thursday night over the B.1.1.529 variant, which has the potential to evade immunity built up by vaccination or prior infection.

While no cases have been found in Britain, officials raised concern over a rapid rise in cases in South Africa.

People who have arrived from the country in the last 10 days will be invited to take a test.

The variant has also been found in Botswana and Hong Kong, with the Hong Kong case a traveller from South Africa.

Have you been affected by the changes to the red list? Let us know at webnews@mirror.co.uk

A health worker talks to people as they wait to register for vaccines at the Springs train station on the East Rand, South Africa
(

Mr Javid said the new strain "may be more transmissible" than the Delta strain and "the vaccines that we currently have may be less effective".

"Our scientists are deeply concerned about this variant. I'm concerned, of course, that's one of the reasons we have taken this action today," he added.

Asked what the situation would mean for the UK over the coming weeks, with Christmas approaching, he continued: "We've got plans in place, as people know, for the spread of this infection here in the UK and we have contingency plans – the so-called Plan B.

He went on to say: "Now to be clear, we have not detected any of this new variant in the UK at this point in time.

"But we've always been clear that we will take action to protect the progress that we have made."

Secretary of State for Health and Social Care, Sajid Javid
(

Mr Javid said as well as the suspension of flights, anyone that arrives from the six countries from 4am on Sunday must quarantine in hotels.

"If anyone arrives before then they should self-isolate at home and take a PCR test on day two and day eight," he said.

"If anyone has arrived from any of those countries over the last 10 days, we would ask them to take PCR tests."

At the moment around 500 and 700 people are travelling to the UK from South Africa each day, but it is expected this figure could increase as the festive period begins.

The variant has not yet been given the title "variant of concern" in the UK, but one senior UK Health Security Agency (UKHSA) expert said: "This is the worst variant we have seen so far."

Only 59 confirmed cases have been identified in South Africa, Hong Kong and Botswana.

The variant has over 30 mutations – around twice as many as the Delta variant – which could potentially make it more transmissible and evade the protection given by prior infection or vaccination.

Experts from the UKHSA have been advising ministers on the issue.

A number of scientists have expressed serious concern over the variant due to the significant number of mutations in the spike protein.

One senior scientist said: "One of our major worries is this virus spike protein is so dramatically different to the virus spike that was in the original Wuhan strain, and therefore in our vaccines, that it has a great cause of concern."

Scientists in South Africa have warned it is spreading rapidly in the Gauteng province.

The R number there is thought to have jumped to around 1.93, compared to 1.47 in the rest of the country.

The nation’s health minister Joe Phaahla said the variant was behind an exponential rise in cases reported in the last few days, making it a “major threat”.

In the past week daily cases rapidly increased to more than 1,200 on Wednesday and on Thursday they jumped to 2,465.

Experts from the World Health Organisation (WHO) are meeting with South African officials on Friday to assess the evolving situation in the country.

The variant could eventually be given the moniker "Nu" – with the most concerning variants given named after the Greek alphabet.

It comes as Israel also announced it was barring its citizens from travelling to southern Africa and banning the entry of foreigners from the region, due to the new variant.

The same six countries, plus Mozambique, have been added to Israel's "red", or highest-risk, travel list that reflects coronavirus infection rates overseas.

Israelis are banned from travelling to countries on the "red" list, unless they receive special permission from Israel's
health ministry.

In a statement announcing the measures, Israeli Prime Minister Naftali Bennett's office said citizens of the seven southern African nations would not be eligible to enter Israel.

Israelis returning home from those countries would be required to spend between 7-14 days in a quarantine hotel after
arrival.

Previous : Millions of state pensioners to lose £169 next year over inflation and triple lock cut
Next : Inside the deadly DIY boats used by people smuggling gangs to send refugees to sea