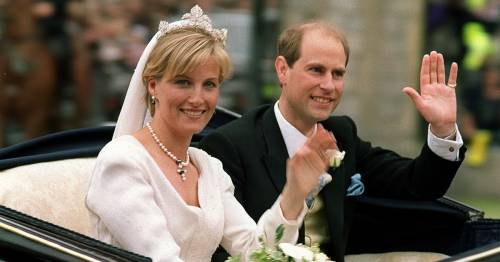 It's a very special day for Sophie Wessex and her husband Prince Edward – their wedding anniversary.

They tied the knot exactly 23 years ago today in 1999 at St George's Chapel in Windsor in what was described as an "informal" wedding that saw the royals turn out in force.

Sophie looked stunning in a wedding gown by Samantha Shaw and was allowed to wear a tiara from the Queen's private collection.

And the more relaxed nature of the wedding saw the couple impose a less formal dress code – and they asked their guests to don evening wear and shun hats.

However, it seems that some royals appeared to bend these rules slightly – with one member of the family seemingly shunning it altogether.

Pictures from the day show the groom's mother the Queen wearing a delicate lilac fascinator in her hair.

While the groom's sister Princess Anne opted for a small green hair accessory.

However, when it came to Edward's grandmother the late Queen Mother, she still wore a hat – although the couple may have been happy for her to do this as she was rarely seen in public without one.

The Queen wore a fascinator at Edward and Sophie's wedding
(

The Queen Mother in her hat at Edward and Sophie's wedding
(

After their wedding ceremony at St George's Chapel, the couple enjoyed a carriage ride around Windsor before heading to their reception in St George's Hall.

Meanwhile, when Sophie married into the Royal Family more than 20 years ago, some eyebrows were raised when she was not made a duchess.

Unlike her sister-in-law Camilla and her nephew's wife Kate, Sophie was given the title of Countess of Wessex when she tied the knot with Prince Edward in 1999.

Her title came as Edward was bestowed the name Earl of Wessex from his mother the Queen upon marriage.

Sophie and Edward with their two children Lady Louise and James, Viscount Severn
(

However, the couple could both be set for changes to their Earl and Countess titles in future – but they will have to wait at least until Edward's older brother Prince Charles becomes King.

It was announced at the time of Edward and Sophie's wedding that he would one day succeed his father as the Duke of Edinburgh with the blessing of the late Prince Philip and the Queen.

If that happens, this, in turn, would make Sophie Duchess of Edinburgh – a courtesy title which was held by the Queen.

Previous : Buckingham Palace probe into Meghan Markle bullying claims ‘will NEVER be published’
Next : The Tensions of Modern Britain in Jez Butterworth’s “Jerusalem”