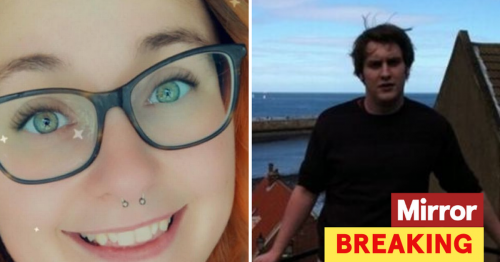 A married couple who were killed at home with their kids close by have been pictured for the first time.

Stephen, 34, and Jennifer Chapple, 33, lost their lives in Norton Fitzwarren, near Taunton, on Sunday night.

Their deaths followed a long running dispute with neighbours over parking, neighbours claimed.

A friend of Jennifer's, who worked in a garden centre, posted a stirring message online after news of her tragic death broke.

"Make time for your friends," she wrote.

"Make that visit to see family. You just never know what could happen tomorrow."

Stephen was head of IT at a local college

One heartbroken loved one wrote: "Chick, I bloody miss you. Thank you for the laughter, joy and craziness you brought into my life."

Her husband Stephen, 34, was head of IT at West Somerset Community College and also made informational videos about computing that he posted online.

The deaths have left the small community in shock.

One resident claimed they heard some screaming before the arrival of 999 crews at 9.45pm on Sunday evening.

The road where two houses were being forensically examined has been cordoned off.

Several tents have been erected outside the properties involved as scenes of crime officers carry on their work.

Residents claimed there were up to 30 emergency response vehicles and a helicopter at the scene of Sunday night's horror.

The village resident, who did not want to be named, said: "We heard some screaming and then within a short space of time there were loads of police and ambulance people here.

"This is normally a fairly quiet little road. But the police have said they had been in contact with those involved before, so there must have been a big problem in the background."

The Norton Fitzwarren street was cordoned off while police investigated
(

Norton Fitzwarren is a village of around 3,000 people and is around two miles outside Taunton in Somerset.

Stephen and Jennifer were found with serious injuries at an address in Dragon Rise in Norton Fitzwarren at around 9.45pm on Sunday, Avon and Somerset Police said.

Despite the efforts of emergency services, they were both pronounced dead at the scene.

Two children were in the property at the time of the killings, the force said.

Avon and Somerset Police said formal identification of the victims is underway and their post-mortems will be carried out in due course.

The force said that due to prior contact with those involved, it had referred itself voluntarily to the Independent Office for Police Conduct (IOPC).

Detective Inspector Neil Meade, of the Major Crime Investigation Team, said: "The thoughts of everyone in the force this morning are with the families of the two people who sadly died last night.

"Two young children were inside the property at the time of the incident and while thankfully they weren't hurt, they are understandably distressed at what has happened.

"They are being looked after and specially trained officers have been deployed to support the victims' families in what is undoubtedly the most difficult of times."

Tributes have been left at the scene
(

He added: "We will carry out a full and thorough investigation and we will do all we can to achieve justice for the victims' families.

"While this appears to be an isolated incident, there will be increased police activity in the area to provide the community with reassurance.

"Incidents like this are very rare but when they do happen, we know they cause significant concern so we'd urge anyone with worries or questions to speak to an officer or contact their local neighbourhood policing team."

A police cordon remains in place at two properties on the street while forensic investigations are carried out.

One resident of the new build estate around Dragon Rise said the victims were "very friendly".

Anyone with any information is urged to contact Avon and Somerset Police on 101 quoting reference number 5221274497.