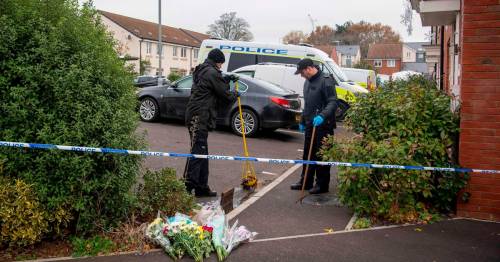 A couple were stabbed to death in a row over parking in their own home as their children slept upstairs, police have said today.

Husband and wife Steven and Jenny Chapple were found dead at home in an incident that has shocked their 'close-knit' community.

It was also claimed that police were called three times to their home over parking disputes in the months before their deaths.

Today police confirmed that one of the victims, Jennifer Chapple, died from stab wounds while post mortem examinations are being carried out on her husband Stephen Chapple.

Cops also confirmed the two children in the house were just five and six years old and were asleep at the time of the incident.

Senior investigating officer Detective Inspector Neil Meade said: “What happened to Stephen and Jennifer is utterly heartbreaking and I can’t begin to imagine the impact their deaths will have on their two children.

“Family liaison officers are supporting both families and keeping them updated on the progress of our investigation.

“I appreciate there is significant interest in what happened and I’d ask people not to speculate and to think about the impact it may have on the families.”

He added: “This is a tragic incident which has shocked the community and neighbourhood officers are patrolling the area to provide reassurance.

“Should anyone have any concerns about what happened I’d encourage them to talk to them.”

Post mortem examinations are being carried out on Stephen Chapple

A neighbour told The Mirror the pair were attacked in the downstairs part of their home in Norton Fitzwarren, Somerset.

The neighbour, who did not want to be named, said: "They were attacked inside the house I have been told.

It's just so shocking something like that can happen here.”

Another resident claimed the police had been called to the property before. He said: “Police have been out there on at least three occasions because of the parking, it’s utterly ridiculous.

“To think that you can get so angry about it when you all live on top of each other like we do round here it’s just much easier to get on with each other.”

An aerial view of the scene of the incident in Somerset
(

The bodies of Steven, 34, and Jenny, 33, were discovered at their house on Sunday evening while their two young boys were unharmed but "distressed" inside.

One man aged 34 and another aged 67 were arrested on suspicion of murder and the younger man in police custody while investigations are ongoing.

Other residents have confirmed parking was a contentious issue on the estate and drone pictures showed two cars parked bumper to bumper in the Chapples' designated space.

Elsewhere on the tight-knit housing estate tributes were paid to a "genuinely lovely" couple who neighbours said "will be missed dearly" with floral tributes already starting to gather at the scene.

Today police and forensics remained present on Dragon Rise, where the deceased couple lived, and their stretch of the road has been cordoned off while cops try to retrieve a murder weapon.

Police were also seen digging around in nearby drains in the cordoned-off area.

The killings were rumoured to be linked to a dispute with neighbours over parking and today one nearby resident confirmed it had been an issue of contention in the area.

They said the problem with parking was often the topic of discussion on a community Facebook page for Norton Fitzwarren residents.

Drone pictures show two cars parked bumper to bumper in the designated space for the couple on the estate.

Melissa, who also lives along Dragon Rise, said: "I never knew of a dispute over parking that Jenny and Steven were involved with specifically.

"But everyone has an issue with parking around here.

"Some people have multiple cars there isn't space for and it has caused a lot of upset."

Tributes left after a man and a woman were killed
(

But she added: "Despite the parking issues it has always felt like a family-orientated area and the murders have come as a total shock."

Friends, family and people from the community have been dropping off flowers in tribute to the parents, who have been described as being "genuinely lovely people" who "will be missed dearly".

One unnamed resident who lived nearby to the couple, and whose children went to the same school and Jenny and Steven's, said: "Jennifer was always very chatty and she loved dogs – she'd run up to every dog she saw.

"Steve was also a lovely man – he seemed to be very devoted to his children."

Another nearby resident called Barbara, aged 40, said: "I wasn't close to the family but whenever I saw Jennifer she was ever so friendly and was always smiling.

Neighbours paid tribute to the couple after they were killed
(

"She was always really happy and would stop for a laugh and a joke. Her hair was always bright – just like her personality.

"They will both be dearly missed."

Colleagues of Jennifer have also paid tribute to a "well-loved and respected" colleague.

She worked at the Otter garden centre at Pen Elm, near Taunton, and manager of the centre Rob Brooks paid tribute to the popular member of the team.

He said: "It's still raw at the moment for all the staff," he said.

"As a centre, our hearts go out to those children that are left behind.

"She (Jennifer) was a well-loved and respected member of the team. She was a lovely, kind-hearted lady and a devoted mother.

"It's very raw, she was very close to a lot of the team."

A police cordon is still in place
(

Stephen worked in IT and lived with his wife in the property at the new-build estate in the sleepy village.

Another neighbour, whose home backed onto the victim's gardens, said both sets of residents that lived in the properties currently sealed by police were "nice, normal families.

They said: "They were all nice normal families i thought. In summer they would have barbecues and be outside together chatting and laughing as they ate and drank.

"They all seemed totally normal so it is such a shock to discover what happened."

Avon and Somerset Police said the incident on the Dragon Rise estate would be referred to the policing watchdog due to "prior police contact with those involved".

Among the notes left in tribute at the scene was one that read: "Jennifer you lit up the street with your smile.

"You and Steve have been such wonderful friends since you arrived in our lives. Such a kind and welcoming couple.

'You have left a void that will be felt across all those who knew you. Words cannot express how much we'll miss you both."

A police cordon is still in place at two properties on the street while officers carry out further searches.

A police spokesperson said: "Specially trained officers are now providing support to the families of both Stephen and Jennifer and our thoughts continue to be with them at this awful time.

Two men, aged 34 and 67, were arrested on suspicion of murder on Sunday.

And police also confirmed magistrates today granted an extension to the custody time limit in relation to a 34-year-old man while the 67-year-old man has been released under investigation to allow further enquiries to take place.