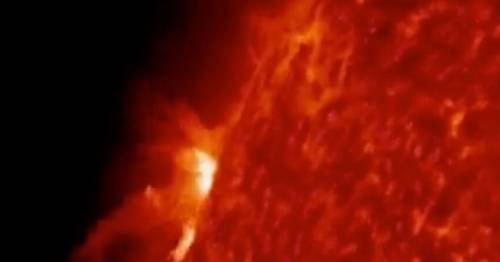 Another huge solar flare from the Sun is heading towards the Earth.

The solar blast, also known as a Coronal Mass Injection (CME), was noticed on Wednesday 24 November and it is believed it may deliver a 'glancing blow'.

Solar flares are very common and not all of them travel towards the Earth, but when they do — they have the power to be disruptive.

Some flares can reach speeds of between 250km-3,000km a second, according to the US SpaceWeather Prediction Center (SWPC).

CME's can be huge in size.

So when could this particular solar storm hit the Earth?

When is the solar storm likely to happen and how will it affect Earth?

The CME should hit the Earth over the weekend
(

The huge storm is forecast by experts to hit the Earth between Saturday and Sunday.

Scientists measure the ferocity of solar storms on a 'G-scale'.

Generally speaking, the stronger the storm, the more likely the northern lights will be seen further south.

G1 storms cause minor disruptions, like small disturbances to satellite operations, while G5 storms have the potential to bring down power lines, satellites and disrupt communication via radio.

One event estimated to have been of G5 strength was recorded in 1859. Telephone lines were set on fire and the northern lights were seen as far down as the Caribbean.

This particular storm is only expected to cause minor disruption.

What is a Coronal Mass Ejection (CME) and how is it caused?

This solar storm could cause minor disruption
(

Coronal Mass Ejections are powerful eruptions of plasma on the Sun's surface.

Billions of tons of material are lifted off the surface and can explode away from the Sun with the force of around 20 million nuclear explosions.

Scientists don't quite yet understand what causes CME's, but do believe that it is something to do with the Sun's magnetic field.

EarthSky.org explained: "Because the sun is a fluid, turbulence tends to twist the magnetic field into complex contortions. Twist the field too much, and it kinks, much like a phone cord or toy Slinky. These kinks snap the magnetic field and can potentially drive vast amounts of plasma into space."

SpaceWeather.com said: "Yesterday, there was one on the Sun.

"It formed when a filament of magnetism lifted off from the southern hemisphere.

"The erupting filament split the Sun's atmosphere, carving out the canyon as it ascended. The glowing walls remained intact for more than six hours after the explosion."