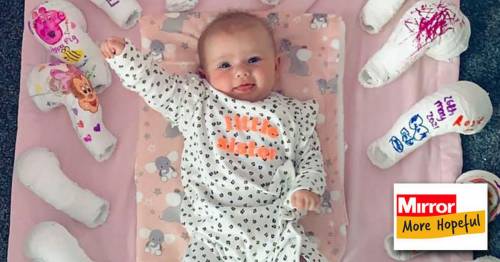 A baby whose parents feared she may never be able to walk has hugely surpassed expectations after pioneering treatment.

14-week-old Rosie will now be able to take her first step when she's older, after getting her foot-straightening casts off.

Mum Lauren and Jamie, 22, were left feeling stressed after discovering their second child had a clubfoot during a scan.

The couple knew very little about the condition – and have decided to speak out to reassure other parents in the same situation.

After months of hard work, Rosie is now on track to follow in the footsteps of older sister Gracie, two.

Rosie surrounded by her old casts
(

Lauren, a healthcare assistant, from Wrexham, North Wales, said: "I'm so proud of how far Rosie has come.

"It's important that others know about clubfoot because when it was discovered that Rosie had it in my scan, I didn't have a clue what it was.

"I didn't expect it to happen to me. It can be genetic but there's no sign that this is the case.

"I just want to show other parents that it's nothing to worry about because Rosie has managed to quickly take the steps to recover.

"My partner, Jamie, and I always say to each other that we're quite young to have had this pressure on us – it was a lot for us to deal with.

"I had such a normal pregnancy with our first child, Gracie, so when I was hit with the news about Rosie it was so out of the blue.

"I was on my own for the scans because of Covid so it was hard to process on my own. I was told that she might never be able to walk if the treatment wasn't a success.

"But she's an amazing little girl and is absolutely smashing it after getting her casts off."

Lauren found out Rosie had Bilateral Talipes (clubfoot) during her 20-week scan.

And 11 days after she was born, the tot's legs were put into casts to help straighten them out.

But Lauren became fearful when her daughter's legs weren't showing any signs of progress after 12 casts.

Mum-of-two Lauren said: "I didn't really know much about clubfoot so my immediate thought was that she would never be able to walk.

"I kept having to get scans and at one point doctors thought she also had Edwards' syndrome, which made me worry even more, but when she was born it turned out she just had a clubfoot.

"She had 12 casts in one hospital but it wasn't really going anywhere so we transferred to a different one where she had just four before she had them off.

"Rosie then had a tendon transfer where her Achilles tendon was cut to release the foot a little, as she was born with it being too tight.

"She's now in boots and bars to further straighten her legs and has surpassed doctors expectations."

Lauren snapped a photo of baby Rosie beaming while surrounded by her 16 casts after she got them off on June 8th.

The mum shared it on social media to help make other parents more aware of the deformity.

She added: "I'm so proud of how far she's come in such a short amount of time, it's amazing.

"I'd like to say a massive thank you to Manchester's Royals Children's Hospital for their incredible work.

"The boot and bar is her next step into being able to walk and she will be in them for twelve weeks.

"My firstborn, Gracie, began walking at one year old and now that Rosie has been so good in progress, she will hit milestones like any other baby.

"It's nice to know that Rosie will be able to grow up like Gracie, who has been brilliant at helping her baby sister."