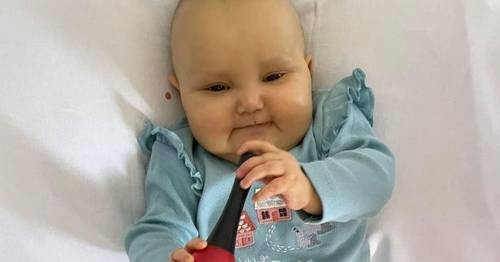 A family have paid tribute to their “happiest, smiliest, sassiest baby” after she died at just nine months old from a rare condition.

Ava Louise was born premature at just 34 weeks, with her mum Hannah not even realising she was pregnant.

Assuming she was experiencing problems with her appendix, Hannah was taken to A&E by her mum but went in to labour when she went to the toilet.

Ava was born with yellow skin as a result of being premature and was put on an incubator before being diagnosed with Alagille Syndrome.

The genetic disorder affects about 1 in 100,000 children from birth and can affect many different parts of the body, including the liver, heart, eyes, face, skeleton, blood vessels, and kidneys.

Those born with the condition can have a severe combination of symptoms.

It's a very difficult disease to treat and in Ava's case, it was affecting her liver.

Doctors informed the family that Ava needed a transplant, however, because of her small size – she only weighed about the same as a bag of sugar – they had to wait to perform the operation.

The whole family put themselves forward for tests to see who would be a match for the transplant.

Hannah ended up being a match and following the surgery, the doctors noticed her liver function had returned.

Unfortunately, Ava then began experiencing issues with her kidneys.

Samantha said: “She was with us over Christmas and then her journey began on December 29 when she was moved to Leeds Children's Hospital.

“She had numerous tests, blood transfusions, surgeries and was fed via a tube.

“Everyone was putting their names forward for the transplant and Hannah was a match.

“They both went in for the transplant in March, and generally the transplant worked and after tests, they saw the liver was working but the doctor said the kidneys should kick back in action.

“But in this case, it wasn’t, her kidney was failing.

The family had their first scary moment the morning after the transplant.

Ava went into cardiac arrest and it was four minutes before she could be successfully resuscitated.

However, after a third cardiac arrest, Ava sadly passed away from kidney failure and sepsis on June 1.

Samantha added: “It was very shocking for us all, for everything that she went through, she was very strong and very happy.”

“She was always smiling no matter what she was going through, we are all gonna miss her very, very dearly.

“We didn’t get to spend a lot of time with her due to being in the hospital, but it was cherished, the nurses were remarkable, all the nurses spoke very highly of Ava and I am not sure that ward will not be the same without her.

“The hospital was brilliant, they couldn’t have done anything more than what they did.

“She was the happiest, smiliest, sassiest baby despite everything she was going through, we went down to see her as a family and we had lots of pictures with her, she used to have a red rattle and she loved it.

“It’s something I will remember forever."

Previous : The Supreme Court’s new gun ruling means virtually no gun regulation is safe
Next : Untold story of the Labour candidate who stood against Boris Johnson and nearly won