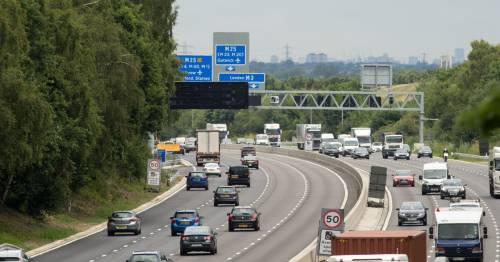 Plans to pause the smart motorway rollout has been backed by campaigners, transport ministers and motoring associations who branded the roads "not fit for purpose".

The Department for Transport on Wednesday said it will halt the expansion of all-lane running smart motorways – where the hard shoulder is used as a permanent live traffic lane – until at least five years' worth of data has been collected to assess whether or not they are safe for drivers.

Concerns have been raised following fatal incidents involving broken-down vehicles being hit from behind due to a lack of a hard shoulder.

Meera Naran, who lost her son in an accident, said the halted expansion would give time to "reassess" the smart motorway network as there are "risks and benefits" to both smart motorways and conventional motorways with hard shoulders.

Her eight-year-old son Dev died on a hard shoulder after a lorry struck his grandfather's Toyota Yaris on the M6 in May 2018.

Since his death, she has campaigned in his memory and was awarded an MBE in June last year for her services to road safety.

She added: "We always believed in making change for the good. That was always our motto and it continues to be my motto.

"I campaign in Dev's memory and his name. He wanted to be a doctor and save lives and I'm campaigning for road safety and I only can hope and pray it will also save lives as well."

The government's decision followed recommendations by the Commons Transport Select Committee in a November report, and a former transport minister has now said the hard shoulder should be reinstated on existing smart motorways.

Conservative MP Sir Mike Penning said: "Whilst we welcome much of report and the government's response to it, I am deeply concerned that the government has not gone far enough in reacting to the Transport Select Committee's work regarding smart motorways and the general unease about them amongst the motoring public.

"It seems illogical to me to decide to pause the rollout of new All Lane Running (ALR) sections on the basis that more safety data is needed, but to allow existing ALR sections to continue to operate. Surely, the existing sections should be rapidly reconfigured to keep the left-hand lane as a kind of hard shoulder.

"Either we are happy that ALR is safe or we're not. If there is any reasonable doubt, which there clearly is as they wouldn't be pausing the roll out of new sections if there wasn't, then we should stop using them."

Louise Haigh, Labour's shadow transport secretary, said: "We know smart motorways in their current form, coupled with inadequate safety systems, are not fit for purpose and are putting lives at risk. Ministers were wrong to press ahead when the strong evidence warned against it.

"Today's announcement is a welcome step, but ministers should go one step further and reinstate the hard shoulder while this safety work and the accompanying review of the evidence takes place."

Meanwhile, the AA motoring association said it was encouraging Transport Secretary Grant Shapps to bring back the hard shoulder overnight and use controlled smart motorways which have a permanent hard shoulder and use technology to regulate the speed and flow of traffic.

AA president Edmund King said: "The AA has been a major critic of 'smart' motorways in our campaign for over a decade to improve their safety. At last, we have a transport secretary who has made progress and taken a positive and pragmatic approach. He has today accepted many of the measures we have been calling for and our important demand that emergency refuge areas should be no more than three-quarters of a mile apart.

"We would like further investigation, which the transport secretary has agreed to, of our proposal for All Lane Running schemes to revert to the hard-shoulder between 7pm-7am to avoid confusion and to offer a refuge to counter live lane collisions that happen at night."

And the RAC called the Government's decision "an unqualified victory for drivers".

RAC head of roads policy Nicholas Lyes said: "Rather than ploughing on regardless in the face of mounting public opposition, we're pleased the government has finally hit the pause button and given itself time to fully consider the safety of these schemes, and the way our motorways are adapted to increase capacity from now on.

"We have long argued that dynamic hard shoulder and controlled motorway schemes – both of which feature a hard shoulder in some form – should be considered given their good safety record and it's important these options are on the table.

"A further commitment to install an additional 150 refuge areas on existing schemes to bring them all up to the same standard is positive news and should go some way towards reassuring drivers worried about reaching one in an emergency."

Tory MP Huw Merriman, who chairs the Commons Transport Select Committee, said that "the government has demonstrated it shares our concerns and determination to make these motorways safer".

Previous : UK has not yet hit Omicron peak although infection rates are falling in places
Next : BOJ’s Kuroda says inflation likely to gradually accelerate