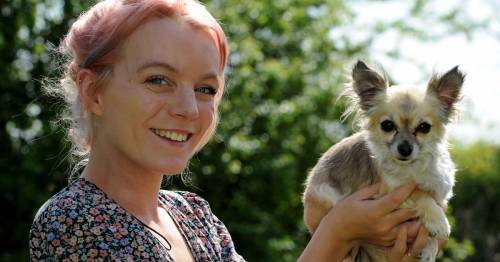 An adorable Chihuahua weighing just less than a bag of sugar has scooped the unofficial title of the tiniest dog in Britain.

At 8.5in tall, the much-loved four-year-old pet is only knee-high to a labrador – but delicate Daisy is definitely the boss according to owner Grace Sheppard, 26.

Grace, a mortgage administrator said: “She yaps at them to let them know she is in charge. She has definitely got small dog syndrome and she certainly prefers humans to other dogs.”

After reading last week about a dog called Olaf who was believed to be the smallest dog, weighing in at 32oz and standing 9.5in tall, Grace decided to check Daisy's dimensions and discovered her pup was even tinier.

Weighing in at under 2lb, little Daisy fits into her owner's walking boot
(

When they brought her home to Swaffham in Norfolk at eight weeks old, Grace’s husband Jordan, 26, a building company estimator, could hold Daisy in the palm of his hand and she hasn’t grown as much as they thought she would.

Grace, whose children are Isabella, five, Fletcher, two, and Harper, 11 months, added: “I can’t imagine any dog is smaller than her. We were told that she was mostly Chihuahua, but had a little bit of Yorkshire terrier in her.

"I expected her to grow to be the size of a normal Chihuahua – but she never did.

“I have friends with Chihuahuas and they are double her size. Everyone says how little she is.”

Daisy has to wear a harness made for kittens because even the smallest dog size is too large, but she often opts to be carried rather than walking.

“She is a little lazy. Nine times out of ten, if we go out for a walk, she likes to ride around in the bottom of the buggy,” said Grace.

“We live in the countryside and we always have birds of prey hanging around over our garden. I’m sure it is because they fancy having her as a snack – but it means we can’t let her out by herself.”

Very happy to amuse herself indoors, the family often find Daisy hidden under a bed or snuggling up with the children’s teddy bears.

At dinner time she tucks into ordinary dog food, but Grace breaks it up into small pieces for her, as well as treating her to bits of tasty cheese and boiled carrot.

“She may be a little – but she has a big heart. She is just so loving,” said Grace.

Do you have a dog that’s tinier than Daisy? Do let us know in the comments below.

Previous : Check out the cost of everyday ‘essentials’ – compared to how often they are used
Next : Bailiff explains five times your car CAN’T be towed away as search for help spikes