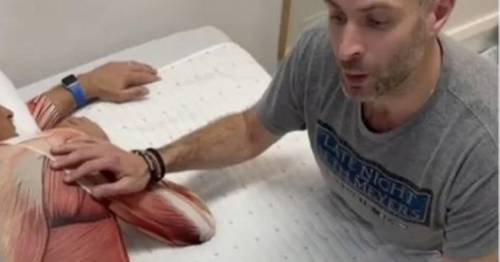 A sleep expert has explained why sleeping on your stomach can cause problems in a viral social media video.

TikTok user @Levitex described why lying on your front with a leg bent can lead to issues by leaving your quadricep muscles extended for a prolonged period of time.

He also revealed the ideal position for a good night's sleep.

"Muscles don't like to be tense for long periods of time," he said.

As he twists his neck he explains that you would not watch TV in a position like that for several hours, adding: “Why would you spend hours upon hours twisting your neck [while sleeping]?".

"I think we've made it very clear that we absolutely hate this position," he said.

The TikToker says sleeping on your side prevents muscle issues
(

He then goes on to demonstrate positions that are better for the body while sleeping.

The TikToker says that you should roll onto your side and stretch your bottom arm in front of you so that your ears, shoulders, hips, knees and ankles are paired on top of each other.

A pillow nestled between the knees can also help to provide additional support.

Several people responded to express their shock at sleeping on your stomach being bad for you.

"Damn I always sleep like position one," a follower said.

"So that's why I get a sore back," another added.

However, several followers replied to say that suggested ideal sleep position was “uncomfortable."

"I'd rather sleep in position one and risk back problems," one said.

"This is NOT easy," another commented.

"But it's not comfy like that … I prefer the first position," a third added.

The sleep expert responded saying, "Comfy is just what we become used to – like slouching on a sofa".

The sleep expert also advised followers to make sure they have a thick enough pillow, which “should lift your head off the bed and fill the gap".

"I started using the pillow in this position after being a stomach sleeper and now I can’t sleep any other way! So comfy," one user commented.

Sleep hacks have become increasingly popular on TikTok, with @YoungerYouDoc's technique of rubbing two fingers on the inside of your wrist to get you to sleep also going viral.

"All you’ve got to do is rub that spot on your wrist for like two to three minutes," he explains in the video.