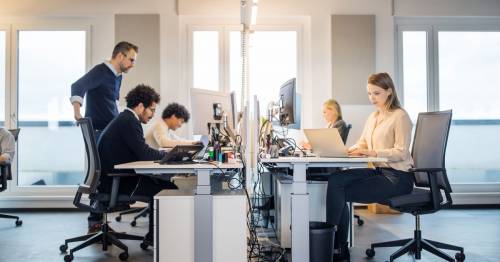 People who sit for more than eight hours a day are considerably increasing their chance of having heart attacks and strokes, according to a new study.

Scientists have regularly spoken about the dangers of a sedentary lifestyle but the extent of its impact has been revealed in a report that found people can be up to 50% more likely to suffer heart failure.

The research comes from following the lifestyles of more than 100,000 people over a decade – and it is a warning especially for office workers who have a regular eight or nine hours sitting behind a desk.

Academics at the Chinese Academy of Medical Sciences and Simon Fraser University analysed data from 105,677 people.

They found that reducing the amount of time sitting, and increasing physical activity would have the same impact as a smoker giving up cigarettes.

In the study, researchers had participants from 21 countries with an average age of 50 and they were asked how much time they were sitting each day.

They were then tracked over the following 11 years and their health data recorded, with the results published in JAMA Cardiology.

It was found that there were just over 6,200 deaths and that people who sat for more than eight hours had a 20% higher chance of dying from a heart disease.

But people who sat the most and also mixed that with little exercise when they did stand up, had up to a 50% higher risk of an early death from a heart attack or stroke.

"The overarching message here is to minimize how much you sit," said Professor Scott Lear, who co-led the study, reported Science Daily.

"If you must sit, getting in more exercise during other times of the day will offset that risk."

He also referred to the important of getting exercise.

Prof Lear continued: "For those sitting more than four hours a day, replacing a half hour of sitting with exercise reduced the risk by 2%. With only one in four Canadians meeting the activity guidelines there's a real opportunity here for people to increase their activity and reduce their chances of early death and heart disease."

And he said that sitting without activity was as bad as smoking.

"Our study found that a combination of sitting and inactivity accounted for 8.8% of all deaths, which is close to the contribution of smoking," said Prof Lear.

"It's a global problem that has a remarkably simple fix. Scheduling time to get out of that chair is a great start."

Previous : Tories announce rise in infant free school meals funding – of just 7p per child
Next : Mum, 36, fell to her death from third floor as kids waited in car to go on holiday – World News