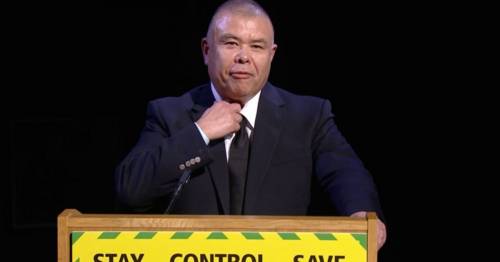 Sir Jonathan became something of a cult hero during the Covid pandemic, known for his strong appearances during the daily press conferences and football analogies.

Professor Van-Tam said: "My time as DCMO have been the most challenging of my professional career, especially the Covid response.

"We all wish Covid had never happened. Notwithstanding, it has been the greatest privilege of my professional career to have served the people of the UK during this time.

"I want to pay tribute to Professor Chris Whitty, the CMO team, my fellow scientists, public health professionals and clinicians whose support, wisdom and energy has been inspiring.

"There are countless numbers who work behind the scenes – all of whom have an unrelenting commitment to help and support the British public. It has been an honour to work with them all.

"I will continue to work until the end of March and look forward to the next challenge."

Health Secretary Sajid Javid said it had been an "honour" to work with Sir Jonathan, who has been on secondment to the Department of Health from the University of Nottingham for the last few years.

Mr Javid said: "It has been an honour to work side-by-side with Professor Sir Jonathan Van-Tam and I am hugely grateful for his advice and guidance since I became Health and Social Care Secretary.

"JVT’s one-of-a-kind approach to communicating science over the past two years has no doubt played a vital role in protecting and reassuring the nation, and made him a national treasure.

"I pay tribute to his relentless work ethic, sense of public duty and leading role in our incredible vaccination programme – on behalf of DHSC I wish him the best of luck on his return to the University of Nottingham."

Sir Jonathan will continue to work for the Government until the end of March.

"I am profoundly thankful for his steadfast support, advice, leadership and commitment.

"His communication of public health advice and science has been remarkable."

University of Nottingham Vice-Chancellor Professor Shearer West said: "All of us at the University are incredibly proud of Professor Sir Jonathan Van-Tam’s work as Deputy Chief Medical Officer, in which he has played a major role in steering the nation through the Covid-19 pandemic.

"I am delighted that Jonathan is returning to Nottingham to join our executive team and lead our renowned Faculty of Medicine & Health Sciences as its next Pro-Vice-Chancellor.

"His academic and leadership expertise is second to none, and the integrity that he has demonstrated in his government role is fully aligned to our values.

"I know that he will take our University’s reputation for excellence in medicine and health sciences to new heights."

Sir Jonathan's role is not political and during the Dominic Cummings/Barnard Castle saga he came very close to outright criticising Cummings' actions.

Last month he stunned viewers of a TV lecture by ripping off his shirt and tie in a cloud of smoke… to reveal another shirt underneath.

The Deputy Chief Medical Officer stood at a mock No10 podium for the start of the Royal Institution Christmas Lectures, aired on the BBC.

The audience appeared briefly bemused by the visual joke
(

“Many of you may have seen me giving public health announcements from the podium at No10 Downing Street.

“But tonight is different!”, he proclaimed.

In a puff of fake smoke, his crisp shirt and tie vanished… only for his “dressed-down” gear to look almost exactly the same, without a tie.

“Tonight I'm speaking to you as a scientist and a doctor, not a government adviser,” he said.

The audience appeared briefly bemused by the visual joke – but quickly eased into the Christmas lecture about how viruses work.

Previous : 3 factors that will determine Boris Johnson’s survival after Downing Street party row
Next : Guatemala’s president seeks jail terms of up to 30 years for people smugglers