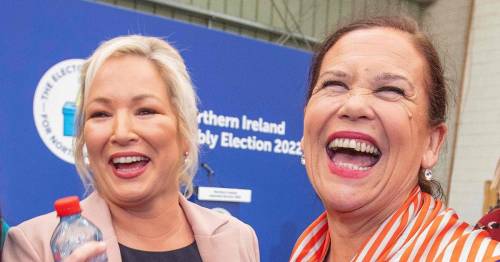 Sinn Fein has become the biggest party in Northern Ireland for the first time after it reached a record 27 seats at Stormont.

The DUP was pushed into second place in the Northern Ireland Assembly election.

Sinn Fein president Mary Lou McDonald told reporters that it was "the election of a generation", later telling the BBC that it was "a moment of equality".

"I will lead my team to Stormont on Monday. The people have told us during the course of this election that they expect us to work together. The people are right."

She earlier described the election as a "defining moment for our politics and for our people".

Michelle O'Neill said the election 'ushers in a new era'
(

It means the DUP can now return a maximum of 25 seats, while the Alliance Party has 17 seats.

The Ulster Unionist Party currently has nine, and the SDLP has seven.

Sinn Fein scooped 29 per cent of first preference votes, while the DUP gathered 21 per cent.

This leapfrogged the 2017 first preference results, where Sinn Fein gathered 27.9% and the DUP picked up 28.1%.

He said: "Congratulations to all the new assembly members and to Sinn Fein for earning the right to nominate a new first minister, it is healthy for Northern Ireland that parties from either community can nominate a first minister and shows the Belfast/Good Friday Agreement working.

"Unionism will still have a strong voice within powersharing and calls for progress on the remaining issues of the protocol have been heard and should not prevent a return to the executive.

"The Government must now prioritise practical solutions through negotiation with the EU and not chase headlines with empty threats.

"The Labour party will always be an honest broker for Northern Ireland, and we stand ready to help Stormont deliver on the promise of these elections and get an executive up and running to help people with the cost-of-living crisis we are facing across the United Kingdom."

Previous : Liberal Democrats fail to rule out coalition pact with Labour at next election
Next : Man who died after horror street attack named as police launch murder probe