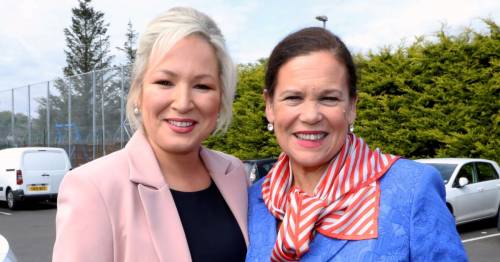 Here's another fine mess they’ve got themselves into.

Sinn Fein’s victory in the Stormont election puts everyone on the spot.

Politicians in London, Dublin, Washington, Brussels and Belfast are scrambling to find a solution to the constitutional crisis it created.

As the largest party in the Assembly, Sinn Fein has the right to nominate its leader, Michelle O’Neill, as the First Minister of Northern Ireland.

But under the Good Friday Peace Agreement, she can only take up the post in a power-sharing executive with the second-largest party, the Democratic Unionists.

And Sir Jeffrey Donaldson, mulish leader of the DUP, refuses to share power unless the British government scraps or radically waters down the Irish Protocol, which sets a customs barrier between Ulster and the UK.

Sir Jeffrey Donaldson – the leader of the DUP
(

Boris Johnson has repeatedly promised to do this, possibly in the Brexit Freedoms Bill to be announced in tomorrow’s Queen’s Speech.

But that step would bring the UK into a full-scale trade and diplomatic war with Europe, and the PM has reportedly had second thoughts.

He has ratted on his pledges to the DUP before. To their fury, he negotiated the Brexit Treaty which put the Irish Sea barrier in place.

Edwin Poots, former DUP leader, warned: “You destroy the Good Friday Agreement if you don’t take action on the protocol. They are incompatible with each other. The political process is hanging by a thread.”

The parties in Ulster have six months in which to form an executive, and Northern Ireland Secretary Brandon Lewis has called on them to do so “as soon as possible.”

He will hold urgent talks with leaders in the province today.

Pressure is also building from the Biden administration, which wants a settlement of the crisis that threatens to undermine the 1998 peace deal.

The US State Department yesterday echoed government demands for a swift agreement on power-sharing.

With the Loyalist marching season in the province barely eight weeks away, tensions could mount further, after the hard-line breakaway Traditional Unionist Voice party took 8% of the vote last week. It demands total, immediate abolition of the protocol.

Sinn Fein played down the issue of unification during the election, but yesterday talked of a border poll within five years, insisting “the compass is set for even greater change”.

Whatever the compass says, the barometer is set for stormy weather.

Previous : Putin’s Doomsday jet flyover at Victory Parade cancelled amid ‘sabotage fears’
Next : ‘Lying Boris Johnson is a liability and Keir Starmer’s fate is in the police’s hands’ – Kevin Maguire