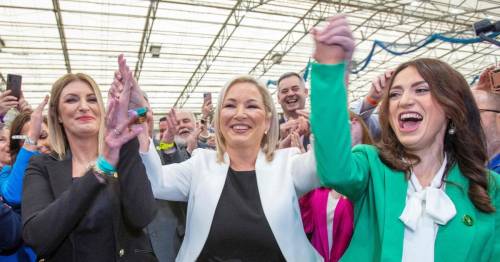 Sinn Fein is on course to become the biggest party in Northern Ireland – potentially plunging the nation into deeper political uncertainty.

With results still pouring in, Sinn Fein was tipped to end the ballot with the most number of MLAs. Counting is expected to run into Saturday.

Sinn Fein secured 29% of the vote compared to 21.3% by the Democratic Unionist Party, data collated by BBC and RTE broadcasters showed after first-preference votes were counted.

Asked about the possibility of her taking the top job, Ms O'Neill said: "It is very early to say, let's get all the votes counted.

Democratic Unionist Party leader Sir Jeffrey Donaldson admitted: "I think it is going to be very tight at the end as to who will emerge as the largest party.”

A Unionist party has always taken the most seats in the Assembly, and previously the Stormont Parliament, since the formation of the state in 1921.

While the offices of the First and Deputy First Minister are equal with joint power, the allocation of the titles is regarded as symbolically important.

The Northern Ireland Protocol, designed to prevent a hard border between the Republic and the province – the UK’s only land boundary with the EU – cast a long shadow over the election campaign.

First Minister Paul Givan quit in February in an effort to force the UK Government to act over the post-Brexit trading arrangements – leaving the Executive unable to fully function.

Asked about the elections in Northern Ireland, Boris Johnson told reporters: "The most important thing is that we continue to support the balance of the Good Friday Agreement across all communities in Northern Ireland – that's what we're going to do.

Previous : TUI issues warning over no food or drinks on flights from 15 UK airports – see full list
Next : Boris Johnson says local elections were ‘tough’ for the Tories – and he ‘of course’ takes responsibility