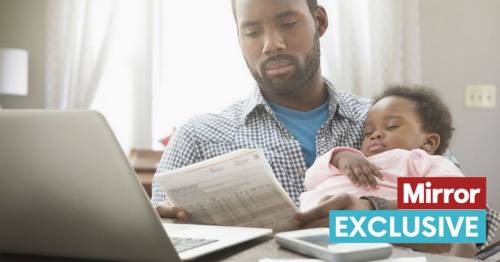 That almost exactly matches the £1,212 a month in wages they were taking home after tax, said the study commissioned by Labour.

The biggest hit to real incomes is from Universal Credit rising 3.1% – well below inflation, which is modelled to average 8% this year.

That will leave a single parent £80 a month worse off in real terms from July, the analysis said.

Other hits come from below-inflation earnings growth of 4.75%, a £40 a month cut.

A Tory National Insurance rise will bite too, as will a freeze in the income tax threshold.

But £15 of that boost will be cancelled out by their Universal Credit being cut as a result.

Shadow Work and Pensions Secretary Jonathan Ashworth said: “Parents will lose the equivalent of a month’s pay this year.

“It proves once again working people can’t afford the Tories.

“With warnings of inflation heading to 10% it’s clear Boris Johnson has lost control of the cost of living crisis causing devastating hardship across the country.”

The analysis looked at a single parent on £1,333 a month, plus £980 in Universal Credit including housing costs, and £25 in Child Benefit.

Meanwhile the real-terms value of their Universal Credit will fall from £980 to £900 a month, the analysis found.

It came as a slew of new figures exposed the scale of the cost-of-living crisis that is starting to bite.

Britain's jobless rate has fallen to its lowest level for over 47 years – yet workers have seen their pay fall £800 a year in real terms as inflation soars.

Regular pay excluding bonuses dropped by 2.9% in March based on CPI inflation – the biggest fall since November 2011.

Yesterday the governor of the Bank of England warned of "apocalyptic" food price rises due to the war in Ukraine.

And today the chairman of Marks & Spencer said food price rises could hit “8% to 10%” across this year.

Labour said the average salary was now £300 a year lower in real terms than it was in September 2007.

And the TUC said real wages across the economy are down by £68 a month compared to a year ago. In the public sector they’re down by £131 a month.

“The government is missing in action at the worst possible time.

“Ministers must stop dithering and come back to parliament with an Emergency Budget.”

She also demanded a windfall tax on oil and gas giants – on which Labour will force a Commons vote tonight. Tories are expected to block it.

Other figures out today showed 3.8million children are now living in households on Universal Credit – up from 3.6million in November.

Dan Paskins of Save the Children said: "Universal Credit is the most powerful tool the government has to tackle the cost-of-living emergency.

“These statistics demonstrate that by increasing social security to match inflation, ministers could make an immediate difference to millions of the children most affected by the crisis.

“But so far, they’ve failed to step up and support families and children are paying the price."

The Child Poverty Action Group warned 1.8million households on UC are having deductions from their monthly benefits to pay back debts, advances and other costs.

Brits can have 25% of their Universal Credit deducted. This has been reduced in recent years but Chief Executive Alison Garnham said: “Draconian deduction rules are making a dire situation even worse.

“Most people repaying a universal credit advance had no option but to ask for that money upfront but then repayments leave them struggling even further.

“The department must reduce the deductions rate now, to prevent more families from becoming desperate.”

Meanwhile the DWP announced it has hit its 10-year target to get a million more disabled people into employment – five years early.

The department said the number of disabled people in employment has risen by 1.3 million since 2017, delivering on a goal to see one million more in work by 2027.

It said 11million workers are covered by the Disability Confident scheme, in which firms including Ford, Sainsbury’s, Hilton and Coca-Cola champion inclusive recruitment.

Minister for Disabled People Chloe Smith said: “This is an important milestone showing our commitment to supporting disabled people to lead independent lives and reach their full potential.

“Ensuring everyone has the same opportunity for a fulfilling working life is a key part of levelling up the country and we will continue to push for greater accessibility and inclusion for disabled jobseekers.”