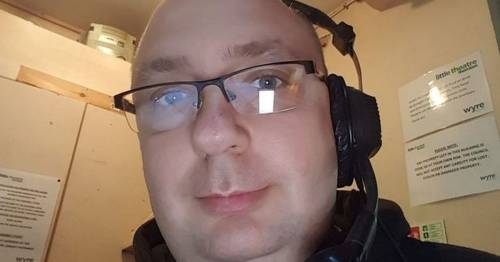 A sick undertaker who shared mortuary photos of dead bodies online while fantasising about having sex with corpses has been jailed for 17 years.

Preston Crown Court heard that he was the "manager, undertaker and embalmer" of a funeral home in Preston, Lancs., and used "military grade" software to share prohibited images undetected.

But after a paedophile, identified as "Mr Choudhry", was arrested for sexually abusing a young boy, police managed to track down Robinson-Wright.

They then found "thousands" of images and videos on a storage "cloud", which included photos Robinson-Wright posing next to dead bodies at his place of work while exposing their naked genitalia.

Kim Whittlestone, prosecuting, told the court on Friday: "On November 1, 2021, the defendant was arrested at the home he shared with his husband and his dogs in Blackpool.

"A number of devices were examined at the scene to prevent the loss of evidence, and his mobile telephone revealed a series of offences.

"Examination of the devices also revealed that the defendant had been in communication with others, via social media apps, such as wickr professional.

"[He] had been organising and facilitating the commission of sexual offences against young children, dogs and also dead bodies."

During online chats, Mrs Whittlestone said the images that Robinson-Wright shared with other parties included deceased men lying in their coffins.

She said: "There was one image of a deceased male in his coffin.

"There was another of the defendant sitting in front of a coffin, pointing at a dead body in the background and third of naked deceased male showing his genitalia.

"The defendant, as with children and animals, engaged in conversation with people online about his sexual desires to rape and abuse corpses.

"He talked with others about sexual fantasies, involving sexual activity with dead bodies at the chapel, and repeatedly discussed his attraction to a number of the corpses within his work.

Mrs Whittlestone said during one chat, Robinson-Wright discussed his "sexual fantasies" involving dead bodies with a man he appeared to know well.

She said: "They were in regular contact, texting about their sexual fantasies, to rape and sexually abuse each other.

She added: "They also talked about another, and the defendant talked about finding and gaining access to the body so that both he and the third party could attend.

"But there is no evidence that conversation led to any action occurring."

Throughout the chat, Mrs Whittlestone said: "They refer to a dead body as a 'colds', and with the defendant as an 'undertaker' and references to 'moving people'."

Robinson-Wright replied, "That was hot. We need to f**k you at work," before revealing that he worked at the "mortuary".

The other party then said, "You know I'm up for that bro" to which the defendant responded, "good man".

The court also heard that the men discussed recently deceased individuals, who had passed away in nearby funeral homes, with reference to their "attraction".

Mrs Whittlestone said: "There's talk about them seeking to gain access to individuals that have been identified between themselves who they are aware are in certain funeral homes within the area.

"[They used] words such as "drove past there yesterday" in reference to a funeral home where a particular person was kept. 'Yes my cock twitched' was what the other party said."

Other disturbing details revealed in court included that Robinson-Wright encouraged a sexual offender, "Mr Moore", to abuse and torture his small dog.

Mrs Whittlestone said: "Videos were sent to the defendant by Mr Moore of the sexual abuse and torture of the dog."

She added: "The dog was clearly in pain and terrified. The defendant encouraged Mr Moore after each video was sent and appeared to be gaining sexual gratification from watching the videos."

Tom Lord, defending Robinson-Wright, said: "The defendant's plea is a concession of what can only be described as the licentious deviancy that lies at the very heart of this offending.

"It was a grotesque breach of trust by somebody who was occupying an important and prominent role within the community."

"He has no convictions prior to this plethora of grotesque offending."

Sentencing him, Judge Graham Knowles QC called the disgraced former funeral director a "pervert" and said he "rejoiced" in injustice.

Judge Knowles said Robinson-Wright, from Blackpool, Lancs., previously a respected member of the community, had tried to adopt a "mild-mannered demeanour" in public.

But he said the defendant only showed the "reality" of his character to those who shared the same "corrupted tastes" as himself.

He said: "You denied any sexual attraction to animals, although you admitted engaging in a sexual act with a puppy of your own.

"You described yourself as an "animal lover" with rescue cats and ferrets. You said you were truly committed to your employment as a funeral director.

"As to the image, you said it was 'by accident' that a corpse was in the background and so and so on.

"[But] you talked utter nonsense to the probation office."

Robinson-Wright was given an extended eight-year sentence on license on top of his jail time and made the subject of an indefinite sexual harm prevention order.