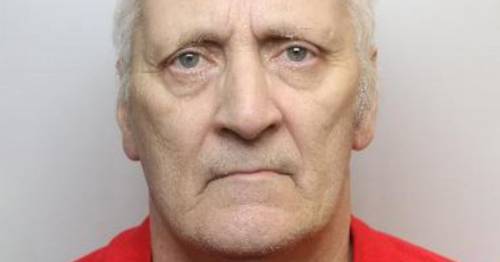 A vile paedophile who raped and abused three young girls – forcing one of them to drink weed killer – has finally been jailed.

John Kelk, 68, has been locked up for 30 years for the sickening historical attacks on the three youngsters.

The girls were left traumatised by the horrific abuse they were subjected to by Kelk, who was finally caught when one of his victims reported what had happened to her as a child.

An investigation was launched by South Yorkshire Police in 2018 and Kelk's last two known victims came forward and reported him.

Kelk, of Wingfield Road in Athersley South, Barnsley, denied a catalogue of offences and went on trial at Sheffield Crown Court.

On Friday, he was found guilty of 22 charges including rape and sexual assault.

Kelk was jailed for 30 years and made the subject of an extended licence period of one year.

The court heard that in addition to his sexual offending in the 1970 and 1980s, Kelk subjected his victims to physical abuse.

On one occasion he dragged one of the girls by her hair, beat her and made her drink weed killer.

DC Nicola Milner, of South Yorkshire Police, said: "This was a particularly horrendous case and I am extremely pleased to know that Kelk is finally behind bars where he belongs after putting each of these victims through utterly horrific ordeals.

"Kelk's abuse began for one of the victims when she was just seven years old and continued into her teens.

"The others were also just young teenagers when he committed these despicable acts. I am full of total admiration and respect for the victims, who have conducted themselves with remarkable courage and dignity throughout this investigation.

"While nothing can make up for what has happened to them, I hope that this significant sentence allows them to begin moving forward with the rest of their lives."

Previous : Killer ‘lay in wait’ ready to ‘ambush and attack’ PCSO Julia James as she walked dog
Next : Freddie Flintoff opens up about Shane Warne’s tragic death: “Hit me like a sledgehammer”