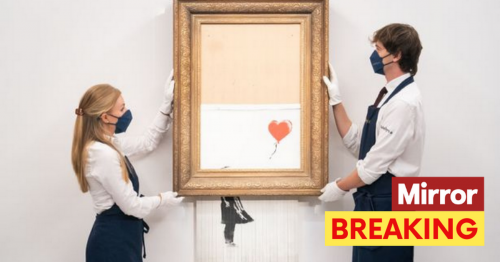 A shredded Banksy painting has sold for an enormous £16million at auction tonight – which is £18.6million with fees.

The famous artwork, "Love is in the Bin", was half sliced by a shredder concealed in its frame when it was sold at auction three years ago.

Onlookers gasped when the then-titled "Girl with Balloon" was sucked into a shredder as the hammer fell following a bid of £1,042,000 at an auction at Sotheby's in London in October 2018.

The work was then renamed "Love is in the Bin" and went under the hammer with a price estimate of £4-£6million tonight – but sold for three times that amount.

Glancing at the work hanging behind him, auctioneer Oliver Barker said: "I can’t tell you how nervous I am to drop the gavel on this one."

After the painting was bought for £16million, Mr Barker joked he was relieved that it was "still there".

Considering the auctioneer's fees, the total amount the new buyer will pay is £18,582,000 – with Sotheby's saying the fee is a record for the street artist.

The artwork, which was created in 2006, originally depicted a girl clutching for a balloon.

However, after being shredded, only the balloon remained in the frame.

Street artist Banksy, whose identity is a closely guarded secret, said on Instagram in 2018: "Some people think it didn't really shred. It did. Some people think the auction house was in on it, they weren't."

A detail of the shredded painting

The painting is accompanied by a Pest Control Certificate of Authenticity, Sotheby's said.

Alex Branczik, chairman of modern and contemporary art at Sotheby's Asia, said: "It is almost three years to the day since one of the most ingenious moments of performance art this century made auction history.

"It has been a whirlwind to follow the journey of this now legendary piece and to have it back in our midst, offering it tonight in the very room it was created by the artist.

Sotheby's said the final price including fees is £18.6million

"Banksy is no stranger to making headlines and this latest chapter in his story has captured imaginations across the world – we can only begin to guess what might come next."

Sotheby's said the work fitted into an illustrious history of anti-art including Marcel Duchamp's anonymous submission of Fountain, a porcelain urinal remounted on a pedestal in 1917, to Ai Weiwei, who photographed himself intentionally dropping an alleged Han Dynasty urn.

Alex Branczik, Sotheby's chairman of modern and contemporary art, said: "When Girl with Balloon 'self-destructed' in our saleroom, Banksy sparked a global sensation that has since become a cultural phenomenon.

"During that memorable night, Banksy did not so much destroy an artwork by shredding it, but instead created one.

"Today this piece is considered heir to a venerated legacy of anti-establishment art."

The unnamed European woman who bought the piece in 2018 said: "At first I was shocked, but I realised I would end up with my own piece of art history."

The artwork, then named 'Girl With Balloon', which shredded itself after being sold for more than £1 million at auction
(

The painting returned to auction this evening at Sotheby's, London
(

It depicts a young child ignoring his superhero toys in favor of playing with one representing a nurse and was painted as a tribute to NHS healthcare workers in the UK.

The highest price Banksy had previously generated at auction was £9.9 million, which was shelled out in 2019 for Devoted Parliament.

The artwork depicts MPs as chimps in the middle of a Commons session.