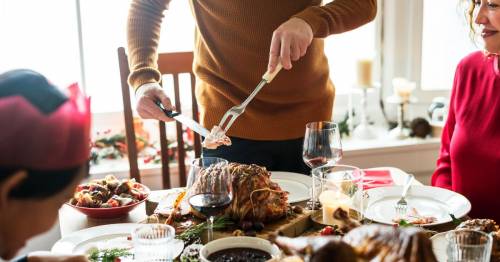 Shoppers will see fewer food items on the shelves for Christmas due to supply chain pressures, MPs have been told.

Cold Chain Federation boss Shane Brennan said there had been a "significant scaling back" of the sector's ambitions ahead of the festive period.

Downing Street admitted there would be "challenges" with getting the full range of presents under the Christmas tree after months of supply chaos.

Boris Johnson's spokesman told journalists on Tuesday there would "definitely" be enough turkeys to go around but individual sectors could face some issues.

Mr Brennan, who represents the temperature-controlled logistics industry, said there would be a reduced range of food options available on the shelves to prevent shortages.

He told the Transport Committee: "People have made decisions about what they think is achievable, and so we've got quite a significant scaling back in the amount of work we're trying to do, particularly around Christmas.

"The food supply chain gears itself up to deliver at Christmas, and it's quite a lot (to be) scaling back at the ambition of that.

"Whereas normally it'd be get as much out as possible, to sell as much as possible, to make as much revenue as possible for customers that time, we're having to sort of scale that ambition back to try and deliver what we absolutely can."

He added: "It's not about shortages, it's about simplifying. Having less range obviously is one of the key decisions you can make in trying to make supply chains more efficient.

"And it's about reducing the amount of goods you're expected to put on the shelves and then working with the customer base to actually make that clear.

"We are very good at piling high and selling cheap at Christmas time.

"What we have to do is strategically scale that back in order to meet the promise that there will be the stuff you expect to see on the shelves, but not necessarily all the extras."

Shane Brennan, chief executive of the Cold Chain Federation, told MPs there would be reduced choice on the shelves this Christmas

Mr Brennan said global shipping supplies were in "an unprecedented period of stress" – and it was taking two or three days for fresh food arriving at UK ports to be delivered to stores, rather than the same day or the next day.

For frozen food, the gap has increased from between one and three days to up to five and six days.

"We're seeing significant changes and having to re-plan on that basis," Mr Brennan said.

Elizabeth de Jong, director of policy at trade body Logistics UK, said the sector is "adjusting to the new normal".

She said: "We are a dependable sector who does their absolute utmost, and you've seen this throughout the whole of the Covid crisis. I think there is calmness.

"I also think that as a society, even though we've had panic buying over petrol, I think we are getting more used to seeing fewer things on shelves and that being OK, and knowing it's coming.

"Perhaps not getting something the next day but having to wait a few days for it."

Cabinet Office Minister Steve Barclay, who was ordered by the PM to save Christmas, told the Cabinet on Tuesday that he had "alleviated concerns" over potential turkey shortages.

Previous : Northern leaders round on Tories over latest HS2 “betrayal”
Next : ‘Haunted’ church all that’s left of village abandoned after Black Death horror