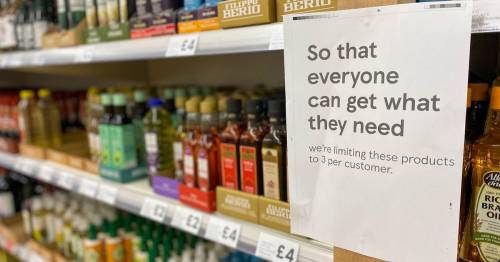 Shoppers have been venting their frustration over “empty shelves” after major supermarkets started rationing bottles of cooking oil.

Tesco is allowing shoppers to purchase only three items each, while Waitrose and Morrisons have restricted shoppers to two items each.

The limits include olive, rapeseed and sunflower oils, with restrictions being placed both in-store and online.

Customers have taken to Twitter to complain about no stock, with one person saying: "I've just come back from Lidl. Empty shelves like you’ve NEVER seen! NO oil of any kind: olive oil/sunflower.

"Manager (who I know) said it’s almost impossible to get oil."

A second person said: "My local Tesco has sooooo many gaps in the shelves. It looks like the early days of the pandemic with panic buying."

Another shopper tweeted: "I couldn't get any oil of any kind during my shop either."

A fourth customer said they could only buy larger, more expensive bottles of oil. They tweeted: "I went to my local Tesco about three hours ago and they had some very large bottles sunflower oil, rapeseed and olive oil.

"The only ones that weren't on the shelves were the cheaper, smaller and own brand oils."

Have you noticed a shortage of cooking oil in your local supermarket? Let us know: mirror.money.saving@mirror.co.uk

Another said: "Managed to find oil in Tesco last week but first time in ages. Farm Foods usually have 5ltre bottles but none for weeks."

Other supermarket shoppers appeared to have more luck with finding cooking oil, with one person saying: "Went to Aldi this evening (near London), no shortage of olive or sunflower oil!"

"No problem in Sainsbury’s," said another.

Sainsbury's and Asda currently have no restrictions on how much cooking oil customers can buy.

The product limits are linked to the ongoing Russian invasion of Ukraine. Both countries produce most of the world's sunflower oil and the war is disrupting exports.

The price of oils in shops reportedly around 20% higher than they were a year ago.

As well as being a cupboard staple, sunflower oil is also found in hundreds of products from biscuits, crisps, mayonnaise and ready meals.

Tom Lock, founder of The British Snack Company, which makes hand-cooked crisps for sale in pubs, told the Guardian that after potatoes, its other vital ingredient was sunflower oil.

He told the paper it was the “industry standard” for snacks and explained that the company had been forced to switch to rapeseed oil.

He said at the moment it was “impossible to get sunflower oil in any quantity” and added that prices would inevitably rise as a result.