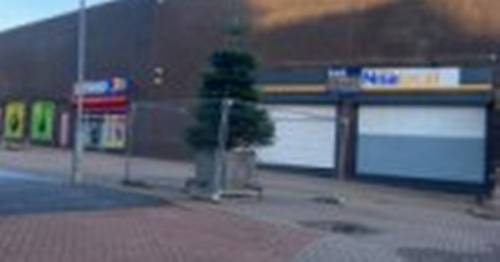 Shoppers in Glasgow have been left in stitches after the "saddest Christmas tree ever" was put on display – complete with equally depressing metal fencing around it.

Locals in Springburn have been having a good laugh at the expense of the small tree which was spotted outside a closed-down corner shop over the weekend, the Daily Record reports.

As the festive season closes in, a spectacular array of Christmas lights and decorations have been erected up and down the country.

But this rather sad looking specimen hasn't even been decorated – making it look very naked in among the festive celebrations.

One resident in Springburn couldn't believe her eyes when she saw the offering.

The local posted a picture on Twitter of the small, scrawny Christmas tree – which had been abandoned with four metal fences around it.

In the post, which has now been liked almost 3,000 times, she said: "Merry Christmas from Springburn!"

Naturally, social media users were quick to poke fun at the little tree.

Paula-jane posted: "Never been more proud of my roots."

James replied: "Coca cola should implement this into their next Xmas advert."

Jordo said: "There's council and then there's this."

And Kaitlin Coffey joked: "Missed the light switch on", followed by a broken heart emoji.

It comes after a Christmas tree that was branded a " national embarrassment" has been removed from Grimsby town centre after locals were left disappointed by it.

Locals were baffled when the festive decoration was installed in Riverhead Square on Thursday and several people complained about it, with a resident claiming they had a bigger tree in their house.

A person said: "That is so embarrassing. It's an insult to Grimsby."

Another added: "It's a bit of a let down. Could have done better."

Following criticism by residents, the Christmas tree was dismantled by contractors last week.

Councillor Callum Procter issued a statement to explain why the tree was removed, claiming it was installed too early – and adding that a bigger one will be installed in the town next week.

He said: "There are great plans for celebrating the start of the Christmas period next week. Unfortunately, the Christmas Market tree was installed too early, and we understand that people were confused and thought this was our civic tree.

"The tree has been removed temporarily today and our contractors are reinstalling again, for free, ahead of the market next week.

"I’m looking forward to seeing people enjoying the illuminations, the market, and the revamped St James' Square with the civic tree and the special lighting on the Minster as part of the Christmas experience."

Previous : David Haye rejects John Fury fight offer and would only return to face son Tyson
Next : BBC and Met Office ‘at war’ over white Christmas with polar opposite forecasts