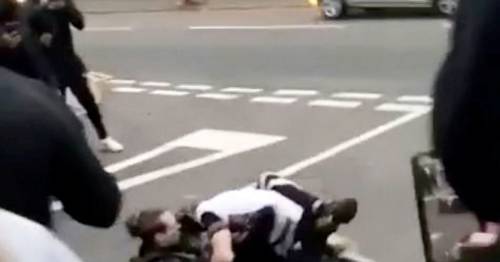 The footage shows a brutal fight between the two which is filmed as bystanders laughed and shouted encouragement to the two men.

The fight happened on a residential road in Kidderminster, Worcestershire between two men seemingly named Dan and Colin.

Mobile phone footage shows one of the men striking the other with an unknown weapon as one of the 12 onlookers shouted: "Smash him Dan, smash him. Whack him, go on.”

Onlookers cheered them on and filmed the brutal clash
(

Someone else shouted: “Go on Colin, f****** have him” as the brawl spills onto the junction of the street.

One man is seen bleeding from a wound in his head as a woman who was watching the fight jumps in and takes a weapon out of the way.

The man continues his brutal assault without his weapon, pinning the other man to the ground and delivering a series of punches and elbows to the face.

The footage was obtained by the website Birmz Is Grime over the weekend and West Mercia Police has been contacted for comment.