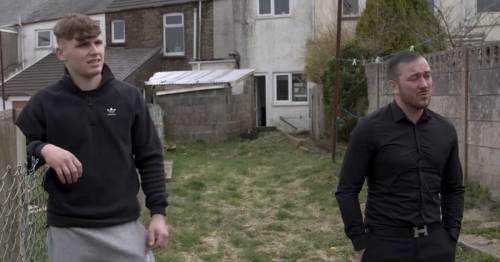 A pair of over-ambitious would-be property developers left a house 'unmortgageable' after gutting the place, leaving a TV presenter speechless when he saw the damage.

As part of Channel 4 's Great House Giveaway, two strangers who have never owned a home are given cash to buy, renovate and sell a property at auction.

They have to stick to the strict budget to get it liveable but, if successful, get to split any profit made.

Daniel, 36, and 18-year-old Peter were tasked with getting the four-bedroom terraced property in Neath, South Wales, into a liveable state, but after seeing the state of the place, Peter dropped out of the project, reports WalesOnline.

The two were tasked with getting the four-bedroom terraced property in Neath, near Swansea, into a liveable state
(

Daniel was left to crack on but when presenter Simon O'Brien made his first visit since the property had been bought, he was shocked at the amount that had been ripped out, leaving it, in his words, un-mortgageable.

This ninth episode of series three focused on the property in Skewen, an area both Peter and Daniel were familiar with.

Daniel, who works in a food processing factory, wants to foster in the future, so the number of bedrooms and large garden was the biggest draw to the house for him.

Apprentice plumber Peter said the property caught his eye due to its location. He said: "I know there is a big park around the corner, and it's a nice place to live, so I think it'll be a nice house to do up."

The house was described as "deceptively spacious four bed terrace with an extended kitchen, [that] done up, could be worth £120,000."

The property needed tonnes of work
(

Both men did an initial inspection of the property, which brought up a few areas of concern.

In one of the rooms there were mushrooms growing from the skirting board, whilst in another there was a hole in the floor, and cracks in the walls.

The house appeared dated throughout and was in need of a new kitchen, bathroom and roof.

Daniel was particularly concerned by the cracks in the wall. He said: "This could be the money pot but we will see."

Both Peter and Daniel agreed that they would need at least £15,000 to make the property liveable, which is exactly what presenter Simon gave them.

Both men seemed optimistic, but when the build began, Peter got a little daunted by the enormity of the project, and decided to pull out.

Before the work began, Simon told Daniel to "go gently" on the property and to not start ripping it to pieces.

However, Daniel did not heed this advice, as when Simon arrived, the property was unrecognisable.

A lot of the house had been ripped out
(

Simon said: "It's not very often I'm speechless, but this is one of those times.

"The house has been well and truly gutted – no, demolished. No – destroyed, to the point it's completely un-mortgageable."

As the build progressed, Daniel seemed to uncover more and more problems.

One day, he arrived on-site to find he needed a whole new roof. For him, that was the end of the project.

By the end of the six months allotted for the renovations, the house wasn't in a liveable state, meaning it had to go back to auction.

Despite his loss, Daniel still insisted he learnt a lot from the project. He said: "It was good. Obviously from a learning and personal experience, but obviously it was a lot more difficulty than we expected in the beginning.

"Each time a hurdle would come along, I'd try and sort of, have a bad day and push myself back up and say 'Oh come on now, you know you can do it' and then obviously one day, I walked in the house, I opened the upstairs door and there was no roof."

Previous : How to get better mileage, save on your next tank as gas prices rise
Next : Girl’s dream Disneyland holiday in tatters as passport delays forces family to cancel