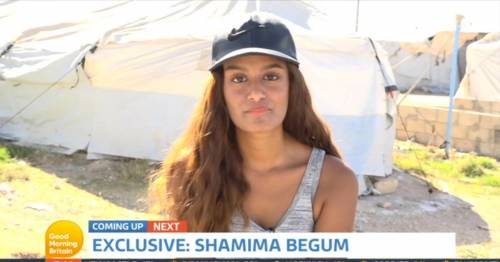 Shamima Begum has demanded a 'fair trial' in the UK after apologising for her 'justification' of the Manchester Arena bombing.

The ISIS bride claimed she did not know women and children were hurt or that anyone died when Salman Abedi blew himself up at a concert in 2017, killing 23 people.

In an interview with Good Morning Britain, she said it was not justifiable for people to kill others in the name of religion.

It is in stark contrast to her previous claim that the terror attack was justified because airstrikes had killed civilians in Syria.

When confronted over her comments, Ms Begum told Good Morning Britain: "I am completely sorry for anyone who has been affected by ISIS.

"I in no way agree with what they did I am not trying to justify what they did, it's not justifiable to kill innocent people in the name of religion and I just want to apologise.

The ISIS bride later said: "I know some people – no matter what I say or do – believe I haven't changed

"I tell you from bottom of my heart I regret every decision I've made since I stepped into Syria… I will take it to my grave this feeling of regret and disgust at myself.

"Just give me another chance."

The ISIS bride is demanding a fair trial in the UK

Ms Begum, who wore western clothes and pink nail varnish in her latest interview, denied claims that she was directly involved in terrorist preparations.

She told Good Morning Britain: "I am willing to go to court and face the people who made these claims and refute these claims, because I know I did nothing in IS but be a mother and a wife.

"These claims are being made to make me look worse because the Government do not have anything on me.

"There is no evidence because nothing ever happened."

She added: "I would rather die than go back to IS."

The 22-year-old, who had her British citizenship revoked by the Home Office over security concerns, appeared from the camp in Syria where she is being detained.

Previous : MIDEAST STOCKS Major Gulf stocks little changed in early trade, Saudi shares inch up
Next : Girl, 6, in coma after fireplace falls on her with force that would ‘knock out a bull’