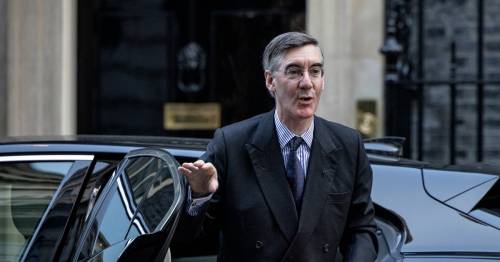 One Conservative told the Leader of the Commons to “have a long lie down” as he dumped on the Union and his own government’s Covid laws during his bid to save the flailing Prime Minister.

The calamitous Cabinet minister first said Douglas Ross – the Scottish Tory leader who’s called for the PM to quit over No10 parties – was a “lightweight”.

Scottish Tories were infuriated when he told BBC Newsnight: “Douglas Ross has always been quite a lightweight figure”.

Mr Rees-Mogg was then asked to name the leader of the Welsh Conservatives – and burst out laughing, before naming the Welsh Secretary instead.

But in the biggest insult, Mr Rees-Mogg claimed the rules may have been “too hard” all along as he scrambled to defend Boris Johnson ’s alleged breach of those rules at a No10 party on 20 May 2020.

Mr Rees-Mogg, who as a Cabinet minister agreed to the rules, said: “I think everybody understands, on all sides of the House, that people were obeying the rules and that these rules were very hard for people to obey.

“I received a message last night from a friend of mine who was unable to go to the funeral of his two-year-old granddaughter.

“One cannot hear these stories without grieving for people who suffered.

“Decisions were taken at the beginning of the pandemic that affected people up and down the country and they were very hard.

“We must consider, as this goes to an inquiry and we look into what happened with Covid, whether all those regulations were proportionate, or whether it was too hard on people.”

Boris Johnson spent 25 minutes at a garden party, one hour after a No10 press conference told the nation garden parties were banned.

In response, No 10 said the Government had sought to find the "right balance" in the regulations but "there is no cost-free option".

Mr Rees-Mogg added: “The Prime Minister has made his apology clear and, as he said yesterday, he understands—as do I—the “rage”, his own word, felt by people who they were making these terrible sacrifices.

“There is no doubt about that and the Prime Minister’s position was absolutely clear.”

Scottish Conservative MSP Jamie Greene told Mr Rees-Mogg – once pictured lounging on Commons benches – to "have a long lie down".

The party's justice spokesman at Holyrood said: "(Mr Rees-Mogg ) should go and have a long lie down, maybe not in the House of Commons."

When asked if he believes Douglas Ross is a lightweight, Mr Greene said: "Not at all, he is a fine leader and he has my full support."

After FMQs, Mr Ross added: "I'm not going to get into personal attacks.

"I disagree with Jacob Rees-Mogg on his characterisation of me, but he's entitled to make it."

Scottish Tory MSP Liz Smith also backed Mr Ross in the ongoing row, stating he was "certainly not" a lightweight and adding she still believed the Prime Minister's position to be "untenable".

She added: "I thought that was a very ill-advised remark from Jacob Rees-Mogg ."

Downing Street said the Government was focused on action to "strengthen the union" after the derogatory remarks by Mr Rees-Mogg about the party's Scottish leader.

The Prime Minister's official spokesman was asked whether Mr Rees-Mogg 's comments undermined the efforts, and he said: "No, I think you can see what we're doing on the union by what Michael Gove has set out, just today, on the review into inter-government relations, which seeks to take tangible action to strengthen our union.

"That's very much been our focus."