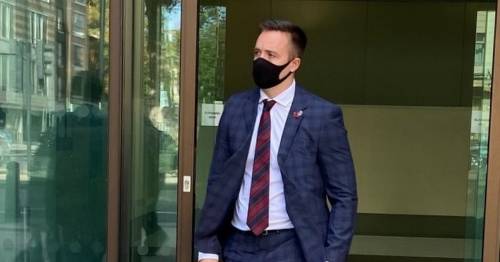 A shamed Met Police officer who clobbered a Wetherspoons drinker over the head with his baton has been let off with a suspended jail sentence because of his 'exemplary' record.

Pc Jack Wood, 26, was convicted of assaulting Jake Smith, 26, who suffered a gaping gash to his skull following the clash in Romford, Essex on 5 January last year.

Pc Wood and colleague Pc Archie Payne, 27, were also convicted of assaulting Mr Smith's friend Scott Rooney, 26, after he told a court how he was grabbed by the throat and thrown to the ground.

Mr Rooney, a railway engineer, said he was attacked by the officers after he tried to take a picture of Pc Wood and his officer number.

CCTV footage shown to the court captured the moment Pc Wood strikes Mr Smith to the head while body worn footage showed PC Payne grabbing Mr Rooney's throat, pushing him to the wall and lying on top of him.

Mr Smith suffered two wounds to his head, 1.5cm and 1cm in length, as well as 6cm of bruising to his chest wall.

She said: 'You are a man not only of good character, but exemplary conduct. This was a moment that was totally misjudged by you.

'I have taken into account that you have been a police officer of exemplary character for six years.

'There is no risk to the public.'

Prosecutor Nicola Shannon said there had been an argument between Mr Rooney and another drinker, prompting two security guards to ask them to leave.

She said they stayed for one more drink but, upon leaving, realised the man they had clashed with was lurking outside with a number of others.

The group was standing between the pub and the bus stop that Mr Rooney, who lived locally, needed to get to.

The pair had asked Pc Wood and Pc Payne, who were outside the pub on patrol, to escort them to the bus stop past the group, the court heard.

Ms Shannon said: 'The officers declined to do so, telling the group if he was their friend it's not their responsibility to help, and returned to their patrol duties.

'Mr Rooney was attacked by the group… but shortly after that Pc Wood ran into the scene, came behind Mr Smith, raised his baton and inflicted between three to four strikes.' 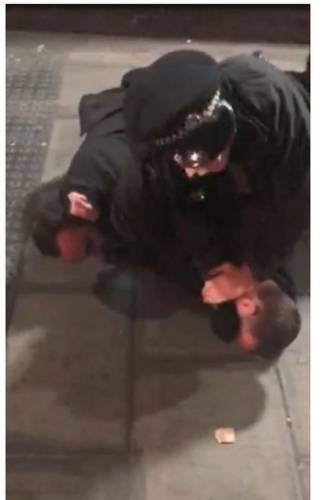 While Mr Smith had his back towards the officer 'Pc Wood appears to go from right to left with the baton held above his head in an overarm motion..brings it down towards Mr Smith.'

Pc Payne is seen on the footage making a 'kicking motion' at Mr Smith while he was on the ground.

After Mr Smith was treated in an ambulance the officers returned to arrest him for affray, but the charge was later discontinued, the court heard.

Giving evidence Pc Wood insisted he had no alternative but to draw his baton and said he was aiming for Mr Smith's shoulder when he hit him on the head.

Robert Morris, defending Pc Wood, had claimed Mr Smith and his friend were binge drinking for ten hours and then 'rugby tackled' other punters outside the pub.

Mr Morris said: 'Mr Smith had engaged in violence, rugby tackling two people to the floor right in front of him at the point that Mr Wood decided to use force. 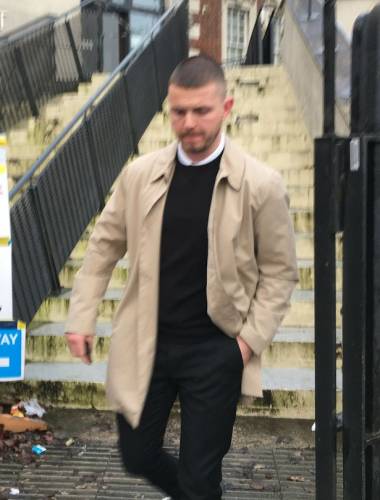 'This was a case as you noted that was disproportionate use of force when the defendant believed that he was trying to stop a fight in the middle of Romford town centre.'

Mr Morris told the court today Pc Wood was of 'had derived his community bravely' for six years and had now lost 'everything.'

He said: 'He is a hardworking dedicated police officer but obviously as a result of the conviction…he will be dismissed from the police. He will be placed on the barred list.

'He has served his community well. He has literally lost everything. His good character, his career and vocation.

'It is unfortunate that a 26 year-old man of good character is in this position, but ultimately this comes down to poor judgment, on your finding, involving disproportionate use of force for not more than seven seconds.'

Pc Wood, based at Romford Police Station, denied but was convicted of one count of assault occasioning actual bodily harm against Mr Scott and assault by beating against Mr Rooney.

He was sentenced to six months imprisonment suspended for 12 months.

The officer was also ordered to pay a total of £1,322 in court costs.

No compensation was ordered as Mr Smith is starting civil proceedings against Pc Wood where he will be requesting redress.

Pc Payne, based at Romford Police Station before he left to become a train driver following the incident, denied but was convicted of common assault against Mr Rooney.

He was ordered to pay a total of £1,632 in compensation and court costs following the trial last month.