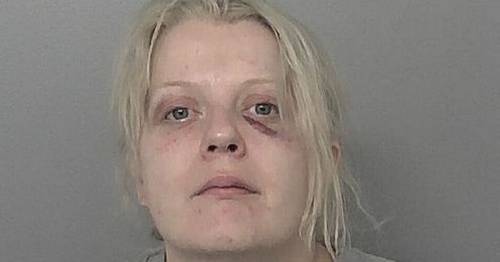 A sex worker who took crack cocaine to "feel promiscuous and sexy" for her "soul-destroying" job lured two unsuspecting men to her knife-wielding boyfriend.

Mum-of-three Clair Hawley, 35, approached a van driver and offered him sex before asking him to give her a lift.

He parked the van, but was soon threatened with a "fearsome" large knife by Hawley's accomplice, who forced him to withdraw £100 from a cash machine, Hull Crown Court heard.

Hawley, of Anlaby, was found guilty of robbery and attempted robbery as a result of the July 26 incident, Hull Live reports.

The court heard that a carpet fitter had finished a job at a Hull pub at 3.15am and was about to drive home to York via the M62.

He pulled off at the Daltry Street flyover, stopped to buy a drink from the nearby Shell petrol station and parked in Hessle Road.

He was then finishing a cigarette when Hawley approached the driver's side door of his works van and asked him: "Do you want any business?", to which he claims he said "no".

She asked him if she could have a cigarette and he agreed.

Hawley then asked the man for a lift and told him that she would give him directions. He pulled up in a car park in Constable Street.

The court heard she lured the man there, knowing that Duthie would appear on the scene and rob him.

Duthie, nicknamed "Scotch Kev", was wearing a mask and a pulled-up hood when he approached the driver's side window 30 seconds later. He also had a knife and a glove with him.

"He told me to give him all my money and threatened me with a knife," the victim said.

Hawley jumped out of the van after finishing rolling a cigarette.

The court heard Hawley lured the victims toward Duthie
(

The man tried to lock himself in the van and start it up, but Duthie smashed the window with the knife, shattering the glass, and marched the man at knife-point to a cash-point at the petrol station.

Duthie demanded to know what the man's bank balance was and, after being told that it was £106, ordered him to withdraw £100.

The man had earlier thrown £60 cash at Duthie in the van, meaning a total of £160 was stolen.

The victim ran back to his van and drove off before later reporting the robbery to police.

Hawley told the court that she had earlier earned £100 from two prostitution encounters before the incident with the van driver.

She claimed that, when Duthie opened the van door, she thought that it was the police and that she would be arrested for soliciting.

"I was absolutely petrified," she claimed.

Duthie threatened the victim with a knife, the court heard
(

The robber was jailed for 12 years after pleading guilty
(

She claimed she did not see a knife and did not know what was going on.

She claimed Duthie never mentioned anything about robbing anyone and denied even hearing anyone saying: "Give me all your money."

She even claimed that she did not recognise Duthie's Scottish accent.

Hawley admitted that she later met another client – a postman – for sex.

In another incident, it was claimed that Hawley lured a second man to a quiet spot for Duthie to rob him, the court was told.

He was going to a greengrocer's in Hessle Road to buy beer.

Hawley claimed that she asked him: "Do you want some fun?" and he smiled and said: "Yes. Follow me."

Hawley was sentenced to eight years behind bars
(

They agreed on £60 and walked down Constable Street before going into the back yard of the man's home in Boulevard.

Duthie then appeared with a knife, shouting aggressively at him.

The man said: "He started waving the knife at me. I got into the flat. He stabbed me in my upper left arm. There was blood everywhere."

Duthie ran away without stealing any money.

The victim was taken to hospital suffering a 3cm wound to his arm and a wound to his finger. He needed seven stitches to stem the blood flow.

Hawley claimed that she had no idea that Duthie was walking behind them on Constable Street.

She claimed that it was a genuine sexual transaction and that there was an agreement with the man that she would go into his flat but he turned violent and she screamed.

Duthie just happened to be around and heard the screaming and came to her rescue as "some f***ing random" on the scene, she claimed.

She also admitted possessing heroin on May 18 last year.

That incident involved police going to her home, strip searching her and a piece of 'tinsel' falling out from under her breasts, the court heard. It was found to be heroin.

She took crack cocaine to "feel promiscuous and feel sexy" otherwise working as a prostitute would be "fairly soul-destroying" for her.

Hawley had been "drug running" for a Liverpool-based County Lines drugs operation, the court was told.

She had previously been attacked by someone in connection with drugs and she had been in violent relationships.

"She went into something of a spiral and took an awful lot of drugs," said Miss Chapman.

Hawley had a troubled background and was in foster care before later going to college and university. She had three daughters.

She had no previous convictions but had a caution for making off without payment.

The court heard that Duthie had previous convictions in Scotland, including assault, and had been jailed in the past.

Kristina Goodwin, mitigating, said that Duthie got involved in drugs through older men and became addicted to heroin.

Duthie came to Hull to join his mother and withdrew from heroin.

He had shown remorse and wanted to apologise to his victims.

Duthie had worked for flooring and marquee companies and he had a daughter.

Judge Mark Bury said of Hawley: "She was working as a prostitute for some time leading up to these allegations to fund her Class A drug habit and debts incurred by her former partner. Her life spiralled out of control."

Judge Bury said that Duthie and Hawley had walked from her Anlaby home to Hessle Road, where she had a sex work patch of her own.

"You went with the intention of robbing punters," he said.

Duthie had a "fearsome" large kitchen knife with him and a change of clothes in a rucksack.

The carpet fitter was "frightened out of his wits" by the threatening incident and Hawley "knew what was going to happen" at the hands of Duthie.

Judge Bury: "Those are serious offences. You have to serve a significant sentence."

Hawley was jailed for eight years. She cried continually after being convicted by the jury and sobbed as she was led out of the secure dock

Duthie was jailed for 12 years.