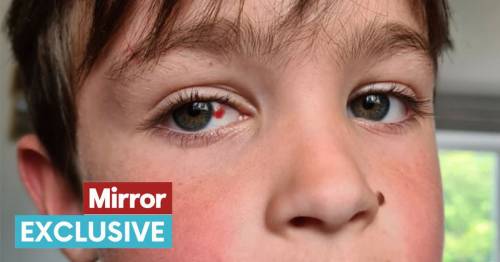 A mum claims sewage-contaminated sludge made her six-year-old son vomit so hard he burst a blood vessel in his eye.

She tried to wipe the 'tar-like' sludge off her one-year-old, Alex, however she believes he still had some of it on him when they returned home on July 9.

A few days later both of her boys fell sick and Charlie was rushed to hospital after vomiting bloody bile and falling unconscious.

It comes after Tory MPs came under fire for voting against an amendment to force water firms to stop dumping sewage in Britain's rivers and seas.

Describing her son's ordeal, Becky told The Mirror: "He couldn't stop dry heaving. All the force made him suffer these burst blood vessels on his cheeks and in his eye.

His brother Alex was coated in muck, which his mum thinks was contaminated with sewage, after falling over on Emsworth Beach
(

"It got to the point where no vomit came up, it was just bloody bile. Because of the force of the vomiting it was making him soil himself.

"He lost consciousness five minutes before the first responder arrived but came to when they got here. The paramedics told me 'this is not normal for a five-year-old'."

The payroll supervisor's children fell sick after Alex fell into 'sticky tar-like' sludge on Emsworth Beach during a dog walk.

The beach is just over two miles away from Southern Water's Budds Farm sewage treatment plant.

Campaigners previously shared shocking drone footage appearing to show sewage from Budds Farm being pumped into the nearby Langstone Harbour.

However Southern Water insisted that 96% of this release was rainwater – and that what looks like sewage in the video was actually silt.

The firm revealed on the Beachbuoy section of its website that it released sewage into Langstone Harbour for more than 26 hours between July 5 and July 7.

This means the last of the waste was dumped into the water just two days before Becky's toddler fell into the sludge.

Becky said: "Alex was toddling on the beach and I noticed he was running to the shoreline. He fell over and was coated in this thick black sticky tar-like substance.

"It absolutely stank, it was all over his clothes. It smelt like something had rotten. I cleaned him up with wet wipes and put him in the bath when we got home.

The youngster's mum, Becky, no longer allows her children on the beach over fears about their health
(

"We had an ordinary weekend and then at about 1am on the Sunday both of the boys were sick at the same time. My husband and I became ill too. It was the worst bug any of us have had.

"I was told by the Environment Agency that it was probably macroalgae. I can't prove otherwise but Budds Farm is just around the corner."

The Environment Agency told Becky it did not believe the area would have been affected by 'anything from Budds Farm' as it is too far away to have an impact.

But the mum said: "How they can say it's not related to the sewage is beyond me. How can they say remnants of sewage are not left behind on the shoreline?

"Due to the nature of the tides and the fact that Langstone is just around the corner, it is inevitable that raw sewage will be carried in and out of the area on a regular basis.

"If I had the money I would have had that stuff tested to see what's in it. I think the sludge was a mix of rotting fish, algae and sewage."

Dr Simon Clarke, head of biomedical sciences at the University of Reading, backed up the mum's account and said her son could easily have been infected by his younger brother.

He added: "If a child falls into sewage sludge, it's highly likely they will get ill. By vomiting, there's every chance that a bug can be spread to siblings and any other members of their household."

After Charlie started vomiting bloody bile, Becky called an ambulance and her boy was taken to Queen Alexandra Hospital in Portsmouth.

He was given anti-sickness medication in the ambulance which managed to stop his vomiting for a few hours.

His mum was tasked with giving him small doses of Dioralyte every five minutes to rehydrate him and he was allowed to go home shortly afterwards.

Although his vomiting returned after his release, he slowly turned the corner and recovered, although his mum and dad were then struck down with the illness.

Becky now wants people to know that Southern Water is still pumping sewage into the sea near Emsworth.

The firm was fined £90million earlier this year after pleading guilty to 6,971 unpermitted sewage discharges.

Becky said: "Most of the people I spoke to after Charlie went to hospital didn't know Southern Water were still doing it.

"I saw the drone footage of the company pumping sewage into Langstone Harbour. It was stomach-turning. The beach is just around the corner.

"There has to be someone out there with the power or money to take. them on. I sent a picture of Alex covered in the sludge to them on Facebook.

"I told them to show it to Ian McAulay, their CEO. They sent back a standard response saying they hope to reduce pollution. I think it's horrendous."

She and her lead control engineer husband, Pete, moved to Emsworth a few years ago after falling in love with the beautiful seaside town.

However, she now no longer allows her children to go on the beach as she is scared they will fall sick again.

In October Tory MPs voted against an amendment to the Environment Bill which would have forced UK water firms to stop dumping sewage in rivers and seas.

After a backlash, the Government performed a screeching u-turn and imposed a duty on water firms to reduce the impact of sewage discharges from storm overflows.

Sewage can be legally pumped into rivers following heavy rainfall or a storm to stop sewage backing up into homes.

It leaked into rivers more than 400,000 times in England last year, the Environment Agency said.

An interactive map from the Rivers Trust shows that the rivers hardest hit by overflows were those in and around major cities such as Manchester, Leeds, Sheffield, Newcastle, Birmingham and Cardiff.

Sewage has also poured into the sea through release valves along the coast, as this map from Surfers against Sewage shows.

The Department for the Environment Food and Rural Affairs previously said it had “made it clear that water firms must significantly cut sewage discharges from storm overflows.”

A Southern Water spokesperson told The Mirror that water can be released through a 'combined sewer overflow' during heavy rainfall to protect homes and businesses and other properties from being flooded.

They added that that overflows comprise 95% rainwater.

The spokesperson added: "We are already acting now to cut pollution incidents by 80% over the next four years and we believe we can achieve a similar reduction in storm released by 2030.

“All 83 of our bathing waters meet strict European standards, a challenge which 20 years ago seemed impossible, but was delivered.

"Now we want to take the next steps which is why we are investing over £2 billion on improving our wastewater network. This investment is on track and is already making a tangible difference in communities across our region."

They added: "This is another visible and public example of our commitment to tackle this issue.

“In order to go faster and further we are already looking at innovative solutions to reduce storm releases while ensuring value for money.

“To ensure action happens we have today launched a dedicated task force which will work with customers and regional stakeholders to focus on reducing the number of these incidents as quickly as possible."

An Environment Agency spokesperson said: “We take our responsibility to protect the environment very seriously, and respond to each and every incident reported to us.

“In this case we have no evidence of sewage at the beach in question, however our officers remain vigilant for issues of sewage contamination on our beaches and in our waterways.”

Previous : Dad fighting to help daughter, 5, paralysed in horror crash that killed son, 1
Next : Vogue model confesses to killing husband who taunted her by having sex with other woman – World News