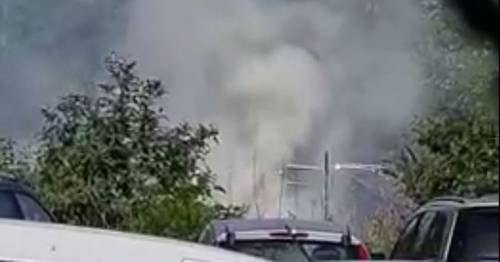 Several cars were seen ablaze at a meet and greet compound near Manchester Airport today.

Local reported seeing flames rising 12ft into the air after the fire broke out at a compound in Styal, Greater Manchester at around 12pm.

In footage from the scene – which is located around two miles from the airport – plumes of grey smoke can bee seen billowing from the car park.

One witness said he'd been told three vehicles had caught on fire.

A passing motorist said the fire initially appeared "out of control".

The clip also shows firefighters gathered at the scene
(

"The fire seemed to be in the middle of the compound. It looked like it was out of control.

"Shortly afterwards the fire service turned up and they spent a while on site subduing it.

"Someone told me three vehicles were involved."

Cheshire Fire and Rescue Service have been contacted for a comment.

Last month MEN reported how holidaymakers who left their cars with a 'meet and greet' airport parking service have returned to find them trapped in the same field on Moss Lane.

Three travellers who flew out of Manchester Airport and booked the parking through an online comparison site, have told the MEN they were unable to contact the firm they booked with and have their cars returned when they landed.

Just days ago it emerged a scammer who ran a fake meet-and-greet car service at Gatwick Airport left his clients' cars parked unlocked in a field.

A passing motorist said the fire initially appeared 'out of control'
(

A passing motorist said 'someone told me three vehicles were involved'
(

Muhammad Amjad ran Park Direct Gatwick Ltd and promised customers he would park their cars securely while they enjoyed their holidays, a court heard.

However, prosecutors revealed the 33-year-old had left all the cars in a field near the airport, with many unlocked when investigators checked.

A spokesman for West Sussex Council, whose trading standards team led the investigation into Amjad, said: "At least one of the vehicles was damaged and dash cam footage proved it had been driven around.

"In July 2019, West Sussex Trading Standards received a tip off that the company was using a field in Ifield to park the vehicles of customers who were flying from nearby Gatwick Airport.