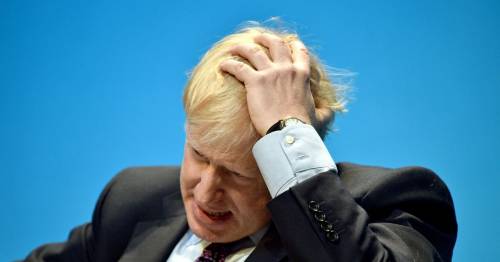 Boris Johnson is facing calls from Tories to resign for misleading Parliament over rule-breaking parties in Downing Street – with one MP branding the PM a "dead man walking".

Scottish Tory leader Douglas Ross called on Mr Johnson to resign, in a major blow to the PM's authority backed by a string of senior Tories including Ruth Davidson.

Senior backbencher William Wragg piled further pressure on the PM, saying his position is "untenable". And Conservative MP Sir Roger Gale said it was time for the Prime Minister "to go with dignity as his choice, or for the 1922 Committee to intervene".

Yet Cabinet ministers circled the wagons tonight, insisting it was their "duty" to defend the PM and even claiming "he thought he would be motivating his team".

A Tory leadership contest can be triggered if 15% of Conservative MPs send no-confidence letters to 1922 Committee chairman Sir Graham Brady.

The 1922 committee was due to meet on Wednesday afternoon.

Mr Johnson tried to quell the outcry over revelations about a "BYOB" drinks party in the garden behind No 10 on May 20 2020 – when gatherings were banned in England.

The PM told MPs he attended the gathering for around 25 minutes to "thank groups of staff" but tried to claim he thought it was a work event.

Speaking before Prime Minister's Questions, Mr Johnson said: "With hindsight I should have sent everyone back inside, I should have found some other way to thank them, and I should have recognised that – even if it could have been said technically to fall within the guidance – there would be millions and millions of people who simply would not see it that way."

His defence was described as "ridiculous" by Labour leader Keir Starmer, who led calls for the PM to resign.

The PM was met with a frosty reception with some of his own MPs sitting in silence with their arms folded, others looking at the ceiling.

Chancellor Rishi Sunak conveniently decided to spend the day on a visit to Devon – more than four hours' drive from Parliament. He eventually joined the roll call of ministers who rallied round the PM at around 8pm.

Home Secretary Priti Patel told Tory MPs to back the Prime Minister – who showed her loyalty when she was found to have bullied Whitehall staff. In a message on a Tory WhatsApp group, Ms Patel said: "Team, today the Prime Minister gave his heartfelt apologies and has taken responsibility for what happened."

Tories had started to break cover to condemn the boozy bash ahead of PMQs amid widespread public anger.

And some were left unimpressed by the PM's response.

Mr Ross said he had spoken to the Prime Minister on Wednesday afternoon but he had not been persuaded.

Speaking to STV News, he said: "I said, yesterday, if the Prime Minister attended this gathering, event in Downing Street on May 20 2020, he could not continue as Prime Minister so, regretfully, I have to say his position is no longer tenable."

Boris Johnson with Scottish Tory leader Douglas Ross, who has called for him to resign
(

Mr Carlaw tweeted: "People in Eastwood, and across the UK made enormous sacrifices to follow the rules.

"Given that the PM has now confirmed he attended a rule breaking gathering, he has lost the confidence of the country, so I believe Douglas has made the right call & that the PM should stand down."

Mr Wragg, who sits on the 1922 Committee executive, told BBC Radio 4's PM programme that: "A series of unforced errors are deeply damaging to the perception of the party.

"The Prime Minister's position is untenable."

Conservative Sir Roger Gale, who has publicly confirmed he has submitted a letter of no-confidence in the PM, said Mr Johnson had misled Parliament.

"Unfortunately what the Prime Minister has said today leaves people like me in an impossible situation," the North Thanet MP told BBC Radio 4's The World at One.

"We now know that the Prime Minister spent 25 minutes at what was quite clearly a party. That means that he misled the House.

"I fear that it is now going to have to be the work of the 1922 (Committee) to determine precisely how we proceed.

"If you look at the twittersphere after Prime Minister's question time today, it sounds to me I am afraid very much as though politically the Prime Minister is a dead man walking."

He later told PA: "I think the time has come for either the Prime Minister to go with dignity as his choice, or for the 1922 Committee to intervene."

Tory peer Ruth Davidson also rowed in behind Douglas Ross, saying: "A tough call to make. But the right one."

The former Scottish Tory leader retweeted her comments from yesterday, which stated: "Nobody needs an official to tell them if they were at a boozy shindig in their own garden.

"People are (rightly) furious. They sacrificed so much – visiting sick or grieving relatives, funerals. What tf were any of these people thinking?"

Asked if the Prime Minister was in trouble, one senior Tory MP told the Mirror: "Yes".

In another sign of Mr Johnson's waning authority, Transport Secretary Grant Shapps was understood to have told the PM he was only willing to do the morning broadcast round if he was given more information about the latest No 10 party.

No information was forthcoming, so the Government failed to put up a spokesman for interview.

But Cabinet ministers mounted what appeared to be a co-ordinated bid to rally back round the PM.

Culture Secretary Nadine Dorries tweeted: "PM was right to personally apologise earlier. People are hurt and angry at what happened and he has taken full responsibility for that.

"The inquiry should now be allowed to its work and establish the full facts of what happened."

And the former leadership hopeful also backed up the PM to the 1922 Committee of backbench Tory MPs, where he is reported to have said Mr Johnson "gets the big calls right" and urged colleagues not to be "flaky".

Education Secretary Nadhim Zahawi told ITV: "I think the Prime Minister did the right thing today to come to Parliament to apologise, to explain himself and his actions to the House.

"He thought he would be motivating his team, you know No10 is a big department as you know."

Commons leader Jacob Rees-Mogg told Times Radio: “I think that people within government have an absolute duty to support the prime minister.

“That is what they have signed up for. And I'm confident that both the foreign secretary and the Chancellor are doing their best to support the Prime Minister."

Previous : Dominic Cummings’ role in uncovering breaches of lockdown after he quit No 10
Next : Grumpy binmen caught on CCTV calling residents ‘smelly’ and ‘dirty b*****ds’